National A Div Bball: AJC advance to semi-finals with 66–33 victory over Dunman High 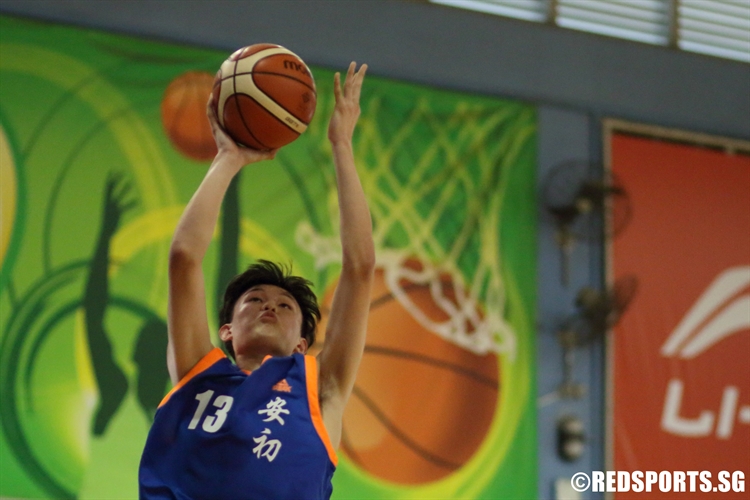 Singapore Basketball Centre, Wednesday, May 9, 2018 — Anderson Junior College (AJC) secured themselves a semi-finals berth after a convincing 66–34 victory over Dunman High School (DHS) in their final 2nd round match of the National A Division Basketball Championship.

AJC finished with a 4–0 win-loss record to top Group P, while DHS are eliminated after finishing fourth in Group P with a 1–3 record.

The game started off with AJC holding a slight 7–4 edge over Dunman with 7:38 remaining, as both sides put up a competitive performance.

However, Dunman soon found themselves unable to keep up with AJC’s offence, as AJC went on a huge 15–5 run over the remainder of the quarter to grab a 22–9 lead.

Dunman stepped up their defence in the second quarter as they displayed energy on defence to disrupt AJC’s offence and contest shots attempted by the opposing offence. Their defensive efforts paid off as they managed to hold AJC to 11 points in the quarter.

However, Dunman were unable to find the same success on offence as they struggled to convert shots into points, putting up only 4 points throughout the period to enter the half-time break with a 13–33 deficit.

Despite putting up a competitive third quarter, Dunman still found themselves outscored 13–9 by AJC as they headed into the final period down 22–46.

Dunman continued to play their hearts out despite facing a 24-point deficit with a quarter left to play, hustling hard on defence to secure defensive boards and contesting shots put up by AJC.

Their efforts yielded them an 8–2 run in the final period to cut the deficit to 30–50.

However, fatigue seemed to take its toll on the Dunman players, as they started to have lapses in protecting the defensive boards. On one occasion, they even allowed AJC to grab three straight offensive boards, forcing their coach to call a timeout with 3:22 to let the players take a breather and regroup themselves.

After the timeout, AJC would proceed to close out the game with a 6–0 run to secure a 66–33 victory and seal their spot in the semi-finals.

AJC will be facing Meridian JC in the semi-finals. The match will be held at Jurong East Sports Hall on May 15. Tip-off will be at 3.00 pm.

Anderson Junior College Roster
We were unable to obtain the team roster. Please kindly leave a comment below if you know any of the players.