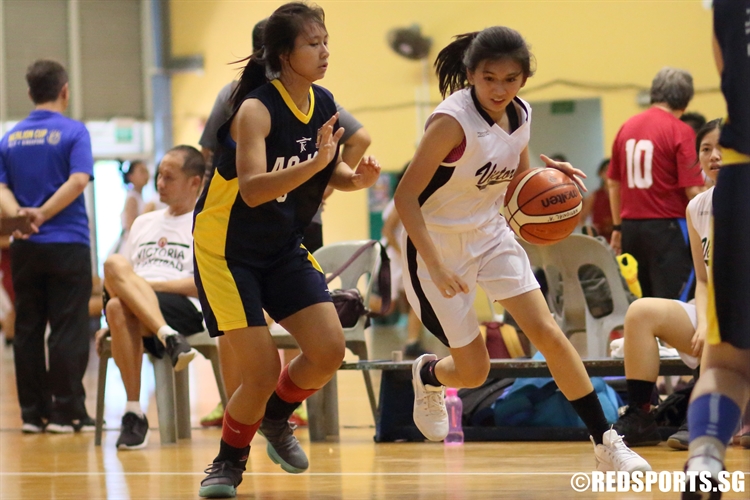 With a strong start on both ends of the court, VJC managed to go on an 8-0 run against ACJC, forcing numerous turnovers and not allowing their opponents to have any significant attempt at the basket until Ang Chyi Yen (ACJC #6) managed to find space for a drive in to draw a foul where she converted one out of both free throws.

Ong Sze Yan (VJC #7) displayed her dominance this quarter, contributing 13 out of 22 points for her team with her sharpshooting beyond the arc and was instrumental in the VJC defense.

Despite their showing in the first quarter, VJC did not manage to get it going in the second quarter. With both teams forcing turnovers off each other yet being unable to convert, it was an even score line for the quarter until Ng Qi Lin (ACJC #15) muscled into the VJC defense to save a ball from going out of bounds for a driving lay-up.

Later in the quarter, VJC picked up their momentum off Megan Lim (VJC #10), who converted both free throws off a foul. Megan will proceed with more points off shots in the paint, and together with Sze Yan’s 3-point shot widen VJC’s lead over ACJC.

ACJC picked up their offensive game against a lapsing VJC defense in the final quarter. This was the only quarter where ACJC outscored their opponents 14-8.

When asked about the lapse in defense, VJC Captain Rachelle Sim (VJC #15) replied, “Our defense was slack at the end as we didn’t want to exert too much. We did well first half but could have done better at converting 3-point shots.”

The game ended with VJC still maintaining a comfortable lead of 47-23.

“The team played well and picked up towards the end, we did our best”, reflected Captain Chyi Yen (ACJC #6). She added, “I’m contented to have this team and to have had our first win. The juniors can pick up from here on.”

On their win, the VJC team had renewed aspirations. Captain Rachelle shared,” Initially, we were aiming just round 2. Now that we have advanced, we should aim for a spot in the top 4, a spot where we have not made since 2 years ago.”