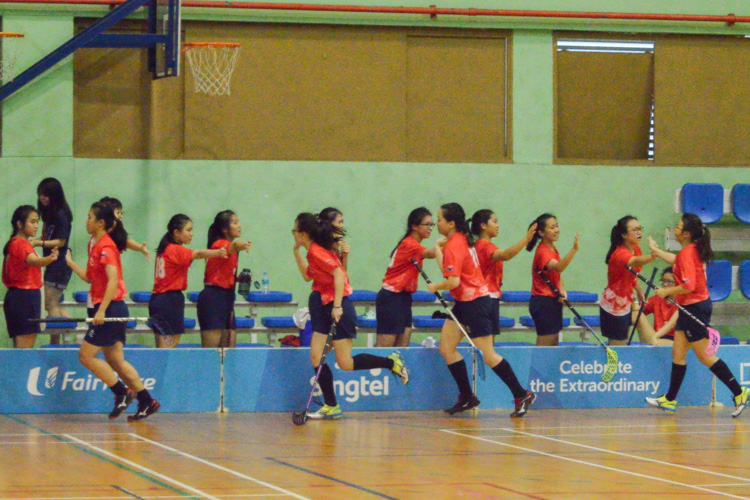 Hougang Sports Hall, Wednesday, April 25, 2018 – River Valley High School showed their prowess when they concluded the preliminaries with a 6-0 win against Hwa Chong Institution in the National A Division Floorball Championship.

This puts River Valley at the top of their group and on to the semi-finals with a 5-0 win-loss record. Hwa Chong ended the preliminary rounds with a 1-4 win-loss record.

“Regardless of the score, RV and HCI both fought really hard and didn’t give up until the end,” said River Valley’s captain, Alyssa Chua (#14).

“But today wasn’t up to RV’s standard. We were making a lot of mistakes.”

In the first period, River Valley showed their dominance, often closing in on the goal post with their team’s Heng Ying Ying (#6) having at least three attempts to score.

Their defence was equally dominant as their offence, as they managed to fend off Hwa Chong’s attacks during a long period of pressure near RV’s goal.

The first goal came from River Valley’s Ong Sze Yi (#8), as she caught her opponents off guard.

Her failed attempt to score was followed by her going around the goal and sweeping it in. Hwa Chong’s Xiao Fen dived down to stop her but to no avail.

Despite conceding two goals, Xiao Fen was still up for the game, blocking five more attempts by River Valley.

River Valley’s Ruo Bing repeated her attack in the first period, causing much alarm to her opponents. Her first attack did not succeed, but during a second attempt, she managed to gain possession of the ball soon after to score another for her team.

The advantage for River Valley increased further to 5-0 when River Valley’s Heng Ying Ying (#6) scored. Seeing her teammate losing a pass, she sped over and took control of the ball, and wasted no time in pushing it into the goal.

Ying Ying scored again in the 43rd minute. Hwa Chong did not give up in their attempts, though River Valley managed to maintain their 6-0 score.

Despite the heavy defeat, HCI’s captain had no regrets, having shown perseverance throughout the match.

“We put up a really good fight against RV, knowing that they’re a very strong and experienced team,” said HCI’s captain, Alicia Chan (#17).

“It has been really enjoyable to play against them and learn from their strengths as well.”