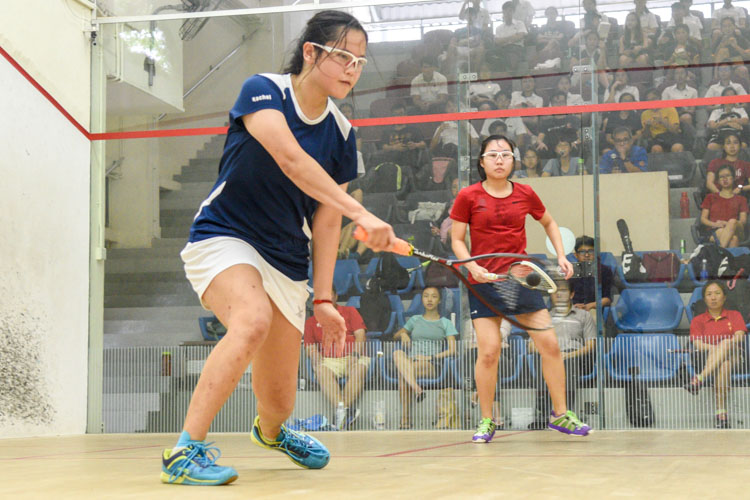 Kallang Squash Centre, Friday, April 27, 2018 — Anglo-Chinese Junior College (ACJC) took a 3-2 win against Hwa Chong Institution (HCI) with a favourable line-up in the semi-finals of the National Schools A Division Squash Championship, securing their place in the finals.

“For this whole season we played quite well, and the line-up was favourable,” commented ACJC’s captain Rachel.

ACJC’s second-seeded Lee Rui Xin comfortably took the first win for ACJC with an 11-2, 11-0 and 11-3 win against HCI’s Chelsea Ong.

The third match pitted off-court friends of 11 years Rachel Lee of ACJC against HCI’s Denise Teo. Despite their friendship, they played with healthy competition and Denise could be seen smiling in acceptance even when she was losing points.

“I was very happy for her whenever she made really good shots,” said Denise.

Rachel took the first game 11-1, winning many points with her precise drops. Denise managed more points in the second game with fast and low cross-court shots but still conceded the second game 11-5. The third game ended with a driven rally on the match point and Rachel concluded her win 11-4.

It was then up to ACJC’s Hazel Wee or HCI’s Soh Valeree to take the win for their respective schools. Valeree felt the pressure and it showed in her three service faults during the first game. Though Hazel took the first game 11-3, Valeree managed to compose herself and played better in the second game.

But her composure alone was not enough. ACJC eventually locked their position in the final when Hazel won 11-5 and 11-3 in the last two games.

ACJC will play against Raffles Institution in the finals on 4th May, while HCI will face NJC in the 3rd/4th placing play-off.