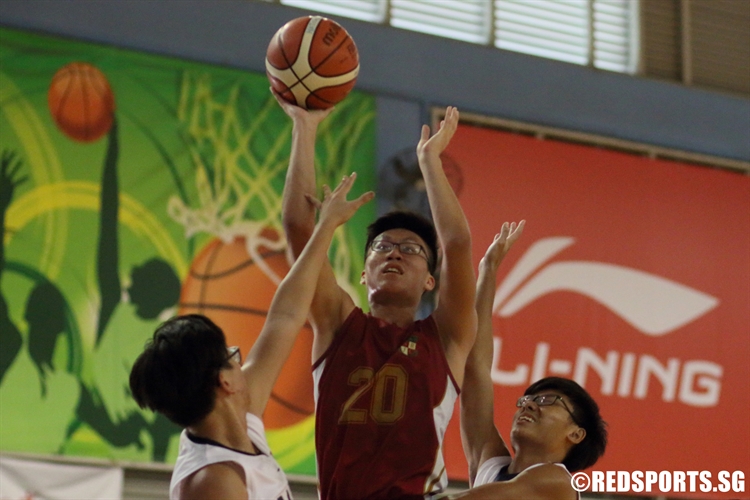 Singapore Basketball Centre, Wednesday, April 25, 2018 — Serangoon Junior College (SRJC) put up a stellar performance against Anglo-Chinese Junior College (ACJC) to seal a 66–49 victory in the National A Division Basketball Championship. This game marks the last for both teams this season.

In the early part of the first quarter, it was a tight game as both teams traded baskets. However, a tight defence transiting to numerous fast-break plays allowed SRJC to open up a lead and ended the quarter with a 19–11 advantage.

SRJC proceeded to extend their lead with a 10–0 run as they capitalised on their fast break chances. Ang Yuze (ACJC #8) eventually ended their run but SRJC would not be stopped and continued to build momentum.

ACJC kept SRJC’s fast break plays at bay with solid defence at the start of the third quarter, with Kean Yee (ACJC #11) beginning their quarter with a 3-pointer.

Despite a sluggish start to the third quarter, SRJC managed to regain their momentum in the final minutes of the quarter and widened the gap further to 48–26 at the end of the quarter.

The start of the final quarter saw a barrage of baskets from both sides of the floor, and the tight defence from ACJC continued to force numerous turnovers off SRJC. ACJC may have managed to outperform SRJC in this quarter, but it was not enough to lead them to a comeback as SRJC took the game with a 66–48 win.

On the team’s performance, Captain Wei Xuan (SRJC #11) shared, “We did our best despite not being able to advance to the next round. We played hard and had a great time, but now its back to preparing for the A levels.” Wei Xuan was also instrumental in the win, leading the defence and creating the momentum for the team.

Reflecting on his personal performance, he humbly remarked, “I felt that I can do better to lead and guide my team along on and off the court, to become better players and better people.”

ACJC Captain Kenneth Mah (ACJC #10) commented,” We put a valiant effort in the season. For today’s game, we focused on defence and did quite well on offence.”

To his teammates, he had this to say, “We made mistakes, the year ones can strive to improve and close down the gaps. For the year twos, rest up, recuperate and study well.”

Both ACJC and SRJC have ended their season with this game. From Group C, Nanyang Junior College and Pioneer Junior College will be advancing to the next round.