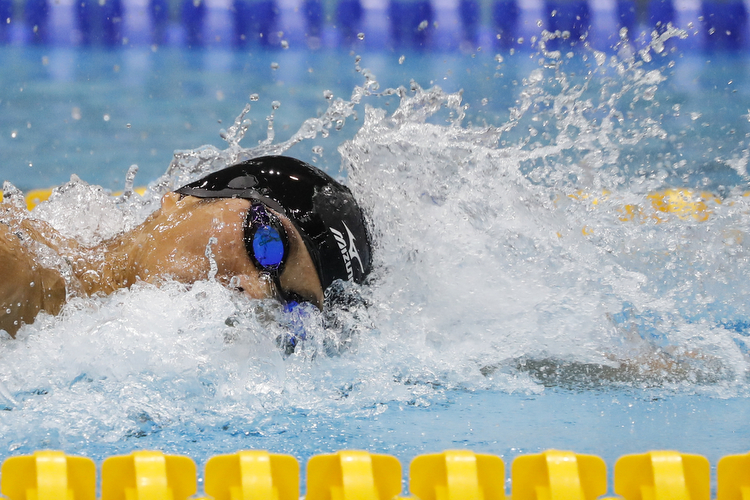 “My performance at the SNAG was really disappointing. I wasn’t pushing hard enough and was not as efficient,” said Samuel.

“I guess the difference was that I really wanted to clinch the two individual golds this year after finishing with only a gold and a silver in the meet last year.”

Samuel had only managed a 52.48s swim in this event at the SNAG but was confident of a much better performance at this meet.

“It felt great to break the record especially since it has been there for a long time. I knew I could do it (break the record) coming into the meet and was really motivated to end off my last national schools meet with a bang,” shared the 18-year-old.

Cherlyn Yeoh of Raffles Institution (RI) and Natasha Ong of Anglo-Chinese School (Independent) [ACS(I)] put their long-standing friendship aside as they did battle in the A Division girls’ final.

The pair were the only finalists to qualify under a minute, and it was clear from the get-go that the focus was on lanes four and five.

Cherlyn came out on top to clinch her second individual gold at the meet, having also won the A Division girls’ 50m freestyle event.

Despite winning the gold in a meet record time, Cherlyn thinks that she was not the favourite coming into the final, as Natasha had topped the qualifying charts with a time of 58.17s, while Cherlyn clocked 58.46s.

“I was ranked second in the heats so I wasn’t expecting to win,” the 17-year-old said.

Her winning time fell short of her personal best time of 56.47s, which she set at the SNAG last month on her way to clinching the gold.

Despite their battles in the pool, Cherlyn is grateful to have formed a relationship with Natasha from their time as club mates at the Singapore Island Country Club.

“We have known each other for seven to eight years, maybe more. I think it is great to have a friend who can encourage you, especially when we are almost the same age and swim in the same event,” she said.

Meanwhile in the B Division boys’ final, Jonathan Tan of [ACS(I)] touched home in 50.24s to lower his own meet record, set just two days ago in the preliminaries.

This was his second individual gold after winning in the B Division boys’ 50m freestyle final on Thursday.

“I’m very happy to break the record and win the gold again,” said the 16-year-old.

Jonathan did not taper for this meet and having won two individual gold medals, he has set his sights on the biggest sporting event in the region this year.

“I did not taper for this event so thank God (for the win). My main goal for this year is to make the 100m and 200m Freestyle relay teams at the Asian Games,” he said.