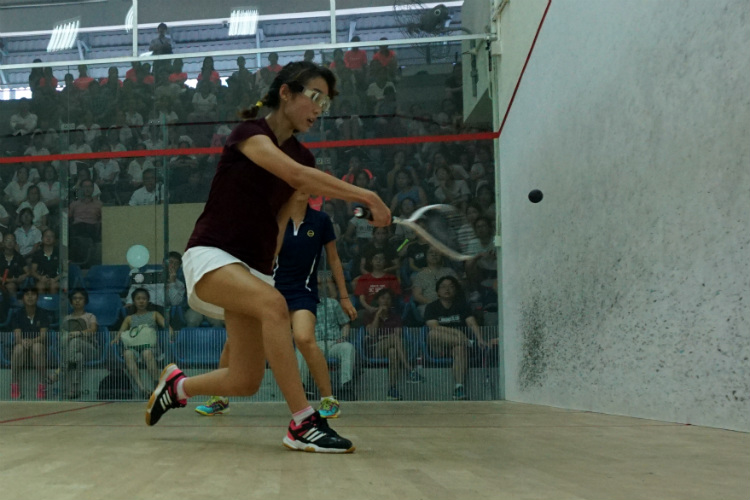 This was an improvement on their 3-2 win over MGS in the preliminary rounds.

“The line-up wasn’t really in our favour today,” said MGS’s captain, Jewel Tan. “But we all played our best today.”

SCGS took the first match with ease but it was the second and third matches that gave spectators nerve-wracking moments.

SCGS’s second player Lim Yu Xuan faced a close first game with MGS’s Michelle Lai. With a 10-all score, Yu Xuan managed to gain the penultimate point with a drop shot. Yu Xuan then won the first game 12-10 when Michelle returned her service to the tin.

However, Michelle came back stronger in the second game. The last few points consisted of intense rallies that required both players to focus on strategy and control of the game. Michelle took the second game 11-7. Both seeded third in their respective teams, this was a match to watch.

Michelle played well with a series of lobs before following them with a few drops to surprise her opponent. However, it was Yu Xuan that took the third game 11-7 and the fourth 11-9 to bring SCGS closer to the championship.

Next was the match between both schools’ fifth seeds, Monica Lim (SCGS) and Hazel Chua (MGS). The first game ended with a stroke to Monica 11-5. The second one was a close 11-9 to Monica though Hazel came back stronger with strong defense shots to the nick. Hazel did not let down her guard, fighting to a 10-9 score, and she managed to win the third game much to the relief of MGS’s supporters.

The fourth game saw both players making more mistakes in an increasingly competitive atmosphere with the championship at stake. But Monica ended the fourth game 11-6.

The fight was over and the champion was decided by the end of the third match. With three matches under their belt out of five, the SCGS squash team and its supporters cheered more loudly than before as SCGS’s third player Monica Lim turned to face her supporters with a huge smile.

SCGS’ captain Caren Lim commented that no matter what the line-up, the important thing is that they “played their best”. This was exactly what players of both schools did although the results were already determined.

SCGS’s Rachel Tan added another winning match for her team. Good with both defense and offence, she finished 11-4 and 11-7 for the first two games. Rachel scored nine points in a row for the third game and finished the game off 11-1 against MGS’s Jewel Tan.