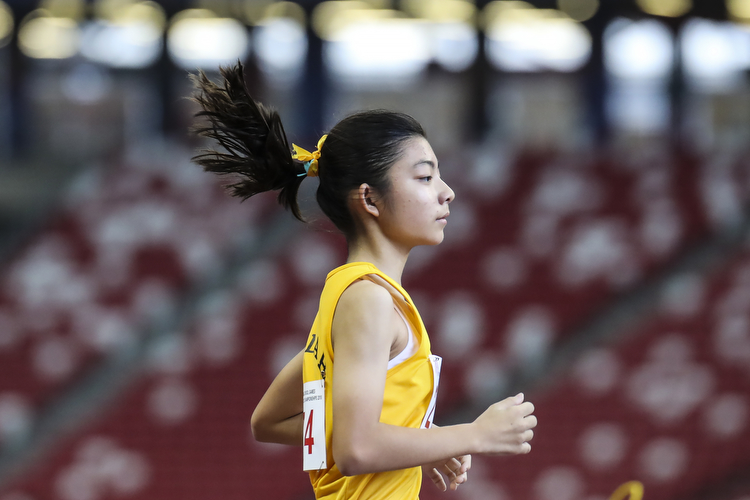 National Stadium, Thursday, April 12, 2018 — There was similarity in the manner of Kylie Tan’s and Chai Jiacheng’s victories in the B Division 1500-metre races at the 59th National Schools Track and Field Championships. Both were content to sit, and let others set the pace.

And when the right time came, they kicked. Past their rivals, all the way to the finish.

Kylie was trailing CHIJ St. Nicholas Girls’ Elizabeth Liau for virtually the entire race. The Cedar Girls’ Secondary 3 student then shifted gears on the last lap, overtaking Elizabeth and finishing in 5 minutes 5.08 seconds, ahead of the latter’s 5:16.26.

Kylie’s time is a massive personal best, bettering her 5:17.11 clocked at the Singapore U18/U20 Athletics Championships in March. It is the fastest time in the B division since 2006, and also places her second in the local rankings this year, behind only Vanessa Lee’s 5:03.01.

The win capped a double distance gold for her, after winning the 3000m last week – a race in which Elizabeth also finished second. It is somewhat redemption for Kylie, after losing to the same competitor in the cross country championships last month.

“I didn’t really think much (during the race),” said Kylie, who had earned 3000m gold and 800m silver in the C Division last year. “I was just really excited because it was a once-in-a-lifetime experience (competing at the National Stadium).”

Jiacheng, though, had much to think about before his 1500m final. Put up a good showing, and he would effectively seal a first B boys’ divisional title in 28 years for Raffles Institution (RI).

Before he set foot on the track, RI were leading by a precarious nine points over Hwa Chong Institution (HCI) in the B boys’ overall standings. But with no HCI boy in the 1500m final, a win would extend the gap to 18 – making it virtually impossible for RI to lose their grip of the title before the relays.

“Yes, there was a little bit of pressure,” said Jiacheng, a Secondary 3 student. “But I was more concerned about the race itself, I was just trying to focus and get ready for the race.”

Like Kylie, Jiacheng turned on his groove on the final lap to power ahead of his competitors.

Singapore Sports School duo Brandon Norton and Harieharan S/O Durairaj produced late surges of their own to grab second and third ahead of Amir.

The victory is Jiacheng’s first at the annual track and field championships, adding to his cross country crown and a bronze in the 3000m this year.

“I am happy with the result,” said Jiacheng. “I really want to thank my competitiors for the amazing race. I won partly because of Amir, he helped me to pace throughout the race so I’m thankful for my competitors.”