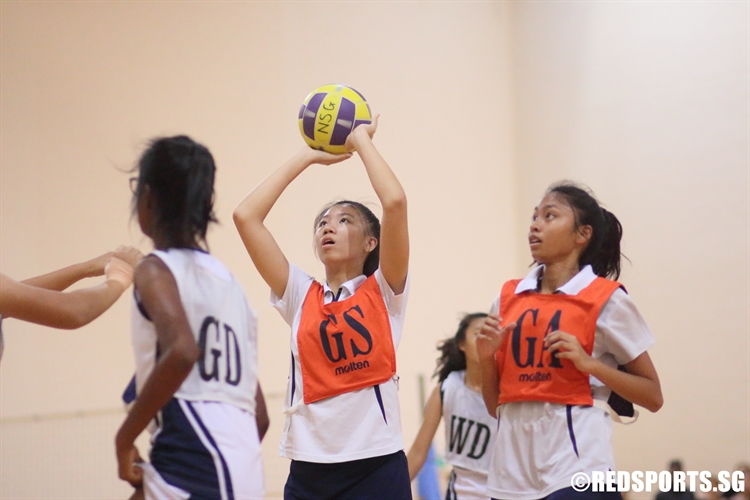 CHIJ (Toa Payoh) led from start to finish in a 53-21 victory over Methodist Girls’ School (MGS), securing progress to their seventh straight national final and ninth title game in 10 years.

CHIJ (Toa Payoh)’s bid for a four-peat had not been a smooth one as they had to overcome several absentees throughout the season, especially during the national rounds when key player Pearlyn Poo had picked up a knee injury.

“Our players were getting injured and falling sick but I think we played well. Pearlyn started and did really well for us today,” shared Goal Shooter Priscilla Wong of CHIJ (Toa Payoh).

Singapore Sports School weathered a late rally from Raffles Girls’ School (RGS) to edge a 25-23 victory in a frantic game right down to the final whistle.

Despite holding a five-point lead at the end of the second and third quarters, Singapore Sports School almost let victory slip when RGS upped the tempo in the final quarter.

Alysson Faith Stewart, captain of Singapore Sports School, revealed how her team came through in the end.

“There were a few parts in the game where we faced some pressure but we overcame it. Everyone just kept encouraging each other to keep our morale high,” shared Alysson Faith Stewart.

Alysson Faith Stewart (SSP captain) added: “We wanted it really badly. Our team spirit was very high and everyone was really into the game.”

After successfully navigating their respective semi-final matchup, a repeat of the 2017 final beckons for CHIJ (Toa Payoh) and Singapore Sports School.

CHIJ (Toa Payoh) are approaching the final with caution despite triumphing 42-18 in last year’s title decider.

“We don’t really know how they will play because this is going to be the first time we face them this year,” commented Priscilla (HIJ GS) when quizzed about her thoughts for the final.

As for Singapore Sports School, they are not afraid of any opponents and believe that their strong team spirit will see them through against any opposition.

“We have a great team spirit and have a lot of trust in one another. We know that we can rely on one another in any game, against any kind of opponent,” said Alysson Faith Stewart (SSP captain).

The National B Division Netball Championship final will be played at 2,45pm, on April 19, at the OCBC Arena.