National B Div Bball Semis (Girls): Heart-breaking loss for Nanyang Girls’ as they fall to Yishun Town yet again 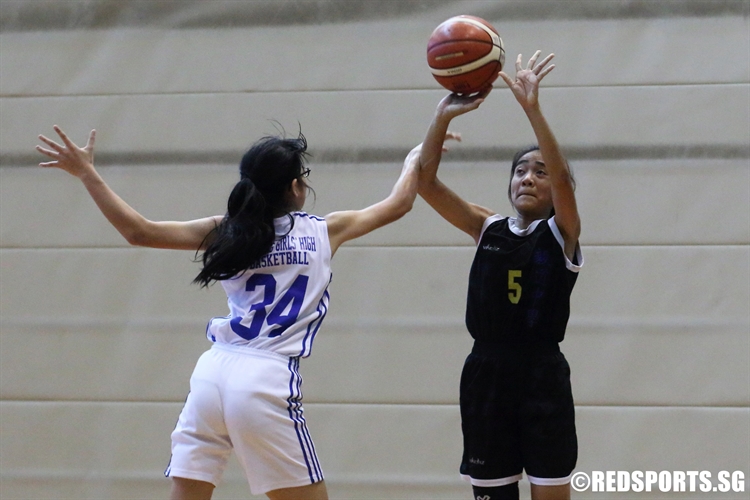 Nur Afiyah (YTS #5) pulls up for a jumper over her defender en route to a team-high 14-point performance. (Photo 1 © Chan Hua Zheng/Red Sports)

Choa Chu Kang Sports Hall, Friday, April 6, 2018 — There is this feeling when you try your best but fail to make the cut. One of bitter heartache, yet a tinge of pride – for no matter what, you know you have given it your all.

It was probably how Nanyang Girls’ High (NYG) was feeling after their overtime loss to Yishun Town Secondary (YTS) 46–47 in the semi-finals of the National B Division Girls’ Basketball Championship.

They had already met once earlier in the tournament, during the preliminary rounds. In that close contest, Nur Afiyah Bte Misban (YTS #5) had hit the biggest shot of the game to lead her team to a 46–41 victory.

However, in this meeting, it would be the other Misban sister, Nur Afifah Bte Misban (YTS #8), who would hit the game’s biggest shots, her two free throws being the game’s winning points.

Nanyang scored their first points of the game off a free throw from Silin (NYG #11). Afiyah (YTS #5) then put her team on the board with a mid-range jumper, which started a Yishun Town 5–0 scoring run for the next three minutes of the game.

This warranted a timeout from Nanyang as they hoped to change up their tactics and increase their offensive production. Surely, that meant more involvement from top scorer Shixuan (NYG #12). Yishun Town realised that and began to pick her up full-court, hoping to get the ball out of her hands.

However, if the ball was coming out of Shixuan’s hands, it would be for assists. She was finding her teammates on the fast-break, in particular, a great one to Silin for an and-one play.

Both teams were attacking the paint relentlessly, and it showed – with 1:37 left in the first quarter, both were in the bonus. Neither was able to capitalise on that, though, and a buzzer-beating layup by Xie Muqi (YTS #11) tied the game at 13-apiece.

The second quarter began with some solid defence by both teams, and it took 3:30 for both teams to score their firsts of the quarter.

Along with this defence came a number of fouls. Yishun Town found themselves again in the bonus with 5:24 to go in the half, and Nanyang soon followed, using their last foul with 2:54 remaining.

Despite this, a fearless Shixuan (NYG #12) trusted her hands and played some solid on-ball defence, leading to steals and fast-break chances. Nanyang used these chances to catch up and end the first half of basketball down by a mere two points.

The second half began with more of the same defence from both, but Nanyang seemed to have carried their momentum over from the last few minutes of the previous half. Yishun Town seemed unable to find good looks from inside the arc, and their opponents were closing the gap.

Michelle Heng (NYG #35) banked in a floater as the last points of the quarter. With these points, Yishun Town had relinquished their lead for the first time since the start of the second quarter, giving Nanyang the lead 33–32.

What looked to be an intense fourth quarter approached, and both teams changed up their defensive strategies to a tighter man-to-man defence. Yishun Town’s defence, despite being ineffective early on, came through in crunch time to help them stay in the game.

Yishun Town’s defence was able to force a travel from the Nanyang offence, handing them the ball with 48 seconds left in the game and down 36–39. Although they could not convert out of the timeout, they pulled down an offensive rebound and found Afiyah (YTS #5) underneath the basket for an easy two.

With less than 30 seconds on the clock, Muqi (YTS #11) raced down the floor on a fast-break and was fouled on a shot attempt. However, she missed both her free throws, which meant Yishun Town was still down 38–39.

With a smaller Nanyang lineup on the floor, though, they could not pull down the defensive board. Li Zixi (YTS #16) took advantage and was fouled on a putback attempt, sending her to the charity stripe and Nanyang into the bonus. She then converted one-of-two from the line to tie the game at 39-apiece.

On the next possession, Mabel Ong (YTS #10) was fouled while taking the ball down the floor. With Nanyang in the bonus, she was sent to the free throw line but missed the opportunity to put Yishun Town up by two.

This time, Nanyang pulled down the rebound and went up the floor with the final opportunity to win the game. But, with 3.7 seconds left in regulation, they were called on a travel and the ball was handed back to Yishun Town. They would then send the game to overtime with a failed attempt at a set play.

Despite playing 40 minutes of neck-and-neck basketball, Shixuan (NYG #12) showed no signs of slowing down, attacking the paint to draw a foul for the first point of the extra period.

Nanyang’s rebounding woes would continue to haunt them in the overtime period, but Silin’s (NYG #11) cold-blooded trey would help them tie the game at 43–43.

With the shot clock off and Nanyang down one, Shixuan found herself with the ball on a two-on-one fastbreak with teammate Rachel Teo (NYG #31). Drawing the defender to her, she made a smart bullet pass to a wide-open Rachel who was standing beneath the hoop.

Rachel took the under-basket shot – and missed. With six seconds left on the clock, Yishun Town pounced on the rebound and held the ball as tightly as they could. The final buzzer sounded: a 47–46 win for Yishun Town, and a chance to compete for it all on Thursday.

A delighted Afifah (YTS #8) shared on how the team handled that nail-biting five-minute extra period: “We were nervous in those last minutes as we’ve never played an overtime period before. But our coach encouraged us…and that helped us to play with composure.”

Yishun Town praised their competitors as well, Afifah adding: “Nanyang played well, and we could see their fighting spirit…the most important thing in games is the fighting spirit.”

Yishun Town will compete against Singapore Chinese Girls’ School for the championship on Thursday, April 12, at OCBC Arena. Nanyang will take on Jurong Secondary for the third time this season in the third/fourth placing match at Tampines Hub on Monday, April 9. Both matches will begin at 1pm.