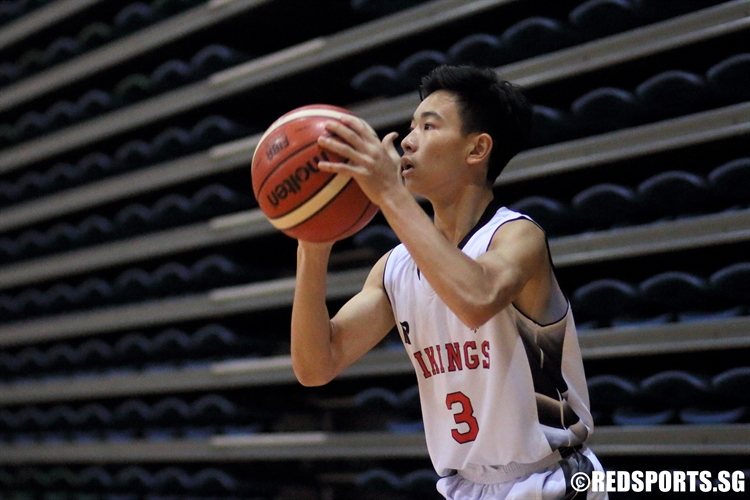 “We played and communicated well with one another on the defensive end,” commented Dillon Ong (NV #9) after the match.

“They (ACS Barker) gave everything they had and really challenged us,” added Reuben David F Amado (NV #30).

North Vista hit their stride offensively in the first quarter, where their quick ball and player movement often created good shots in the paint as well as beyond the arc.

ACS Barker found themselves overwhelmed as they coughed up turnovers against the swarming North Vista defence which cost them offensive possessions and resulted in fast-break points for North Vista.

By the end of the first period, North Vista were in control as they held a 23–14 lead over ACS Barker.

North Vista continued their onslaught by opening the second quarter with a 9–0 scoring blitz to extend their lead to 32–14 with 4:32 left.

ACS Barker’s coach was visibly upset with the team’s performance and promptly called a timeout to regroup and switch up their game-plan.

Following the timeout, ACS Barker clamped down on the defensive end as they forced North Vista into tough contested shots while they aggressively attacked the paint on offence to score points in the paint and draw fouls.

ACS Barker would go on an 8–2 run over the remainder of the second period to cut North Vista’s lead to 11.

The third quarter would prove to be a low-scoring affair as both teams clamped down defensively against each other, forcing the opposing side to either cough up turnovers or force up a tough shot on offence.

ACS Barker were able to outscore North Vista 10–8 in the period to make it a 42–33 ballgame after Cayman Miguel (ACSB #9) unleashed a sick spin move while driving baseline to shake off his defender for a lay-up.

The fourth quarter proved to be ACS Barker’s most productive quarter on the offensive end with 17 points as they relentlessly attacked the paint and crashed the boards for second-chance points to mount a fourth-quarter comeback.

Xavier Tan (ACSB #28) and Cayman Miguel (ACSB #9) proved to be bright spots for ACS Barker on offence as both of them combined to score 13 of ACS Barker’s 17 fourth-quarter points.

With 3:47 left in the game, Khant Zay Naing (#8) drove hard to the basket and made a tough lay-up with his defender heavily contesting him to cut ACS Barker’s deficit to six.

However, a string of costly turnovers down the stretch proved to be the fatal blow for ACS Barker as they lost precious offensive possessions while giving up eight fast-break points to North Vista, dooming them to a 50–62 defeat that ended their season.

North Vista will next feature in the semi-finals of the National B Division Basketball Championship at Choa Chu Kang Sports Hall. They will be matched up against Fairfield Methodist School (Secondary), a familiar opponent which they have faced and defeated 58–49 after a massive fourth-quarter comeback in the preliminary round. Tip-off will be at 3.00 pm on 6 April.