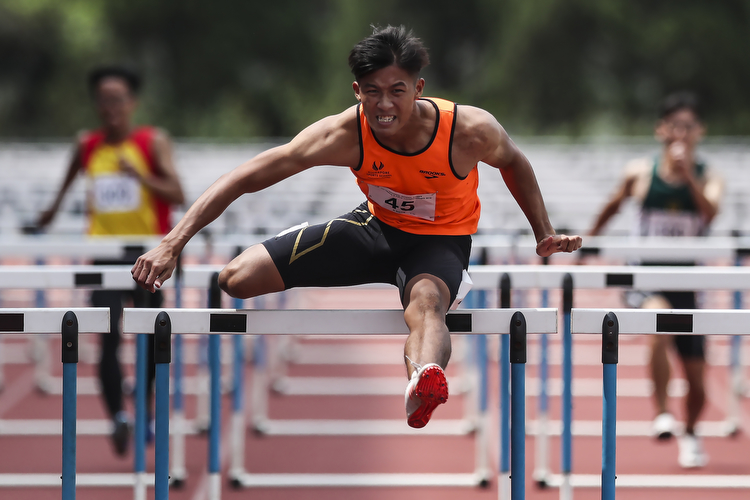 Choa Chu Kang Stadium, Tuesday, April 3, 2018 — Right off the gun, it was clear that Singapore Sports School’s Chong Wei Guan was the victor, as he finished ahead of the A Division boys’ 110 metres hurdles field in a blistering 14.13 seconds to clinch his second straight title at the National Schools Track and Field Championships.

The result is also a new personal best for Chong, besting his previous of 14.31s set earlier in March during the Singapore U20 Championships.

“I’ve been working towards this for a very long time, so it feels really great to be able to win this,” said Chong.

The final year student’s race was one to behold, as he finished two whole seconds ahead of runners-up Gerard Emmanuel Loh (16.33s) of Hwa Chong Institution and Shaun Hin (16.76s) of Raffles Institution.

Chong’s result also qualifies him for the upcoming World U20 Championships, which will be held in July in Tampere, Finland.

“Right from the start of the year, my goal is to compete at the World Juniors and I’m really, really glad that my hard work is all paying off,” added Chong, crediting his coach, Pedro Acuna for his progression.

“I will just put all my trust in my coach, because he’s a genius and I’m really grateful for this guy.

“When it’s time to make it count, he makes it count for all of us.”

Chong already had a taste of competing at the world stage when he participated in last year’s IAAF World U18 Championships in Nairobi, Kenya. He ran in the same event, albeit at a lower hurdle height (0.914m for U18, 0.991m for U20), and finished in joint-20th position in the heats.