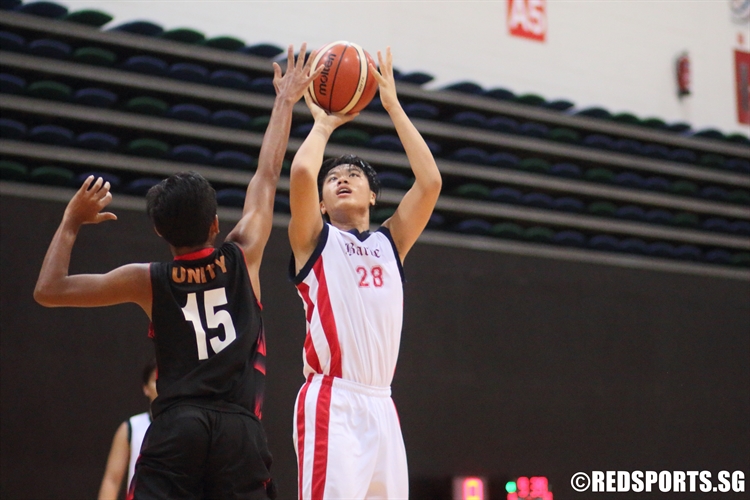 OCBC Arena, Thursday, March 29, 2018 — South Zone champions Anglo-Chinese School (Barker Rd) [ACSB] fended off a furious fourth-quarter rally from West Zone champions Unity Secondary (US) to claim a 62-58 victory in the second round of the National B Division Basketball Championship.

ACS Barker (13-0) is one of two unbeaten schools remaining in the nation together with Dunman Secondary (13-0) following their latest victory.

Nicholas Peh (Unity #7) scored a game-high 21 points and Jonathan Ng (Unity #35) bagged 17, but the duo’s effort was not enough to mount a last-quarter comeback and prevent a second straight defeat for Unity, which previously won its first 13 games of the season.

A 14–6 run from Unity over the final 4:22 of the game had ACS Barker on the ropes, but ACS Barker calmly ran out the clock when they had ball possession with 25 seconds remaining to ensure there was no late drama.

“It was a tough game and a very competitive one. We did our best as a team to get the victory,” said Panca (ACSB #15).

Unity never trailed in the opening quarter and led 13-11 after one.

Dervin (ACSB #11) made back-to-back three-pointers to start the second quarter to put ACS Barker up four and that proved the catalyst for a 19-2 run to make it a 15-point lead in favour of the South Zone champions.

It was a single-digit game at halftime as Jonathan (Unity #35) hit a buzzer-beating elbow jumper to cap a 6-0 run from Unity to close the quarter.

ACS Barker built their biggest lead at 44-27 with 1:35 remaining in the third frame after Xavier (ACSB #28) sank both shots from the foul line, but Jonathan (Unity #35) went on a solo 5-0 run to close the quarter, which included a buzzer-beating coast to coast lay-up to make it 44-32.

Nicholas Peh (Unity #7) started the fourth quarter with a three-point play to make it a nine-point game, but ACS Barker scored consistently in the fourth quarter to ensure that their opponents never got to within striking distance until the last minute of the game.

Unity forced the issue in the final minute and went on a 6-0 run within 18 quick seconds that got the West Zone champions within four. With 25 seconds to go and the game on the line, Unity elected not to foul to stop the clock and ACS Barker kept their cool with some crisp passing to escape with the win.

Unity will next face another zonal champion in North Vista Secondary while ACS Barker will take on Christ Church Secondary.

ACS Barker could guarantee a top-four spot if results go their way in the next round of fixtures but are solely focused on their own game.

“We just have to play to our best and give it our all,” commented Xavier (ACSB #28).