National B Div Rugby: With penalty at the death, Saints beat ACS(I) 13-10 for first title in four years 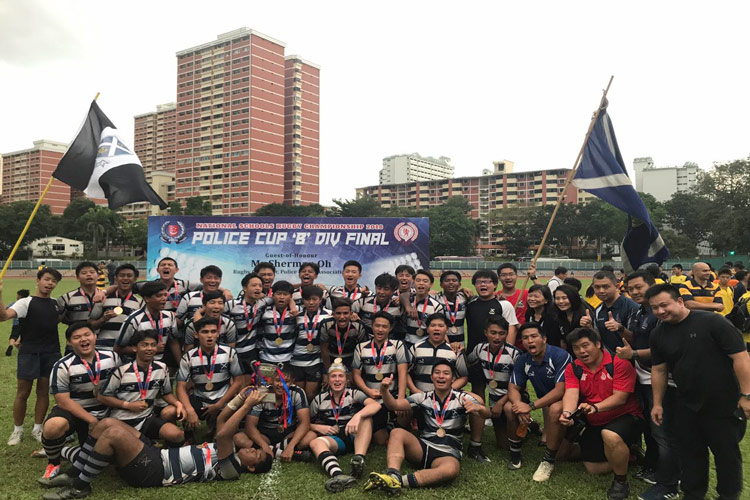 Queenstown Stadium, Wednesday, 28 March 2018 — With the score finely poised at 10–10, Nick Nijhof lined up to take his fourth penalty in the National B Division Rugby Championship final as the crowd hushed. At the back of his mind, the two he had missed earlier that could have given his St. Andrew’s Secondary School team mates more breathing space.

He took some time to steady himself and after more than 10 seconds, took a deep breath before starting his run up. And then, pandemonium.

As it turned out, Nick scored his second penalty with virtually the last kick of the match to give his school its first Police Cup since 2014. The Secondary Four student also scored a try in the first half and the ensuing conversion that helped the Saints beat three-time defending champions Anglo-Chinese School (Independent) 13–10.

“I was very demoralised after I missed those two penalties, which I usually convert in training,” Nick said. “When the penalty was awarded, my captain came up to me and asked me how confident I was. I said 60 percent, but he said, no, he knows I can get to 100 percent and he had full faith in me. That really boosted me.”

The sheer strength and speed of Saints captain Mika’il Yue bin Istiandra and fellow centre Umar bin Mohammed Sha’ari though, were core to St. Andrew’s victory. Umar broke away on the right wing late in the second half on a memorable run that very nearly resulted in him scoring a second try for the Saints.

Mika’il and Umar were so dominant that ACS(I) had focused on preventing the Saints from getting to the ball to them.

“You’ve seen how big and powerful (their centres) are,” said ACS(I) head coach Adrian Chong. “We couldn’t play the way they played. We limited their threatening runs. This was one of the finals that we lost and I’m not disappointed, because the boys really gave it a go. That we even managed to score two tries says a lot.”

ACS(I) played the majority of the first half in the Saints’ half, taking the lead early on with an unconverted try by vice-captain Noah Tan. Flanker Ryan Tan scored the ACSians’ second try in the second half to level the match.

“We worked hard in defence,” said St. Andrew’s co-head coach Alan Wee. “They kept playing tight with the forwards, but when our backs got the ball, we did well.”

With this win, St. Andrew’s finished the season with a perfect 6–0 record, having also defeated ACS(I) 23–14 in the round-robin preliminary round. In that match though, Saints’ star fly half Nick remembered his team conceding about 10 penalties and was made to do fitness training immediately after the match as a result of their ill discipline.

There was no repeat this time, with Saints conceding half that number of penalties in the final. Crucially, all St. Andrew’s players stayed on the pitch for the duration of the game and nobody was sin-binned.

“We’ve built ourselves to be the top team in the preliminaries, but we’ve struggled with the favourite tag,” said Simon Etheredge, St. Andrew’s co-head coach. “ACSI is a very disciplined team, we had to make sure we kept ours and our belief.”

For the Saints, this year’s victory came after a surprising defeat in the semi-finals against Raffles Institution last year, and back-to-back agonising, last-minute defeats in the final against ACS(I) in 2015 and 2016.

“We didn’t panic,” said Mika’il. “We took a team decision on the final penalty because it was almost the end of the game so we just wanted to go for the points. We just wanted to win.”