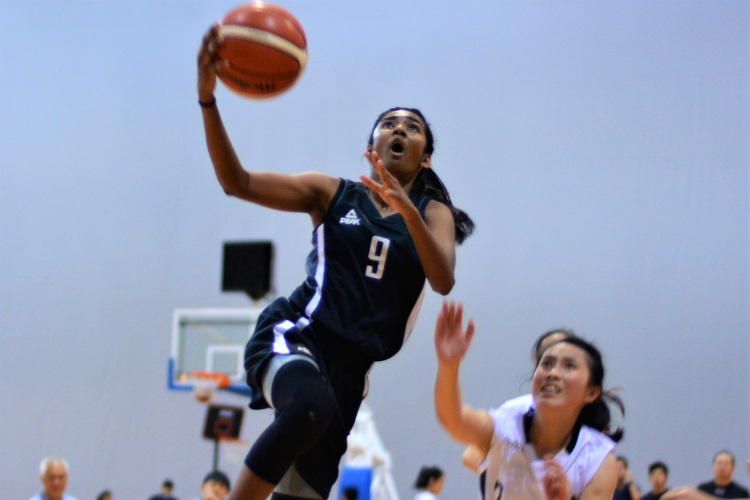 Crystal Nathasha (SCGS #9) goes all the way for the hoop and the harm . (Photo 1 © Low Zheng Yu/Red Sports)

Both teams had already qualified for the top eight following victories against Unity Secondary and Raffles Girls’ School in their first two matches. More impressively, SCGS had not tasted defeat all season.

Crystal Nathasha (SCGS #9), who was once again outstanding on the offensive end, led all scorers with 19 points. Tori Chua (SCGS #7) added 10 points and Alisa Sarah (SCGS #14) chipped in with eight.

Following the victory, the trio showed appreciation for their coach and spoke about what makes their team tick.

“Our coach is different from other coaches as she really cares about us from the bottom of her heart. She motivates us to do well. She is the real MVP (Most Valuable Player),” explained Crystal (SCGS #9).

“Our coach plays a big part in our success. She takes care of our health and we feel comfortable with sharing our personal problems with her. She treats us very well and we sometimes go for lunch and dinner with her,” added Tori (SCGS #7).

“(Most of us) have known one another since primary school so we understand how each other play. No matter which five players are on the court, we always have good team chemistry,” shared Alisa (SCGS #14).

Their good team chemistry definitely played a part in a superb second-half performance.

The game was an even contest for most of the first half except for a brief period in the second quarter, when SCGS were up 21–13. Chung Cheng High (Main) then capped a 7–0 run to make it a one-point game at the start of the third quarter but SCGS followed up with a game-clinching 22–1 run for the rest of the game to claim a 22-point victory.

After the game, Chung Cheng High (Main) acknowledged that they had drifted away from their game-plan in the second half.

“We started off well and managed to stop their fast breaks, which is one of their strengths. In the first half, we executed our game plan well by moving the ball without over dribbling but in the second half, we started to deviate from our game-plan and dribbled more to push the tempo. This led to many turnovers as we fumbled and mishandled the ball,” said captain Vernice Lim (CCH #2).

Chung Cheng High (Main) were looking to build a better mindset coming into the season and they credited their coach for helping them improve the mental aspect of their game.

“We knew at the start of the season that ball movement and defence are our strengths, but we had a weak mentality and were scared of our opponents. So throughout the season, we focused a lot on building a right mentality,” a candid Vernice Lim (CCH #2) shared.

“Our coach encourages us a lot and helps us with improving our mentality. He believes in us and thinks that if we play to our strengths we can beat any team,” added Vice-captain Ng Ruo Yin (CCH #1).

SCGS’ unbeaten season will be put to the test after they were handed a reunion with fellow North Zone powerhouses North Vista Secondary and Yishun Town Secondary in the last eight, with East Zone Champions Anglican High rounding out the group.

Chung Cheng High (Main) will be facing tough and unfamiliar opposition in the second round, having been drawn to face the past two national champions Nanyang Girls’ High School and Jurong Secondary. South Zone Champions National Junior College complete the group.