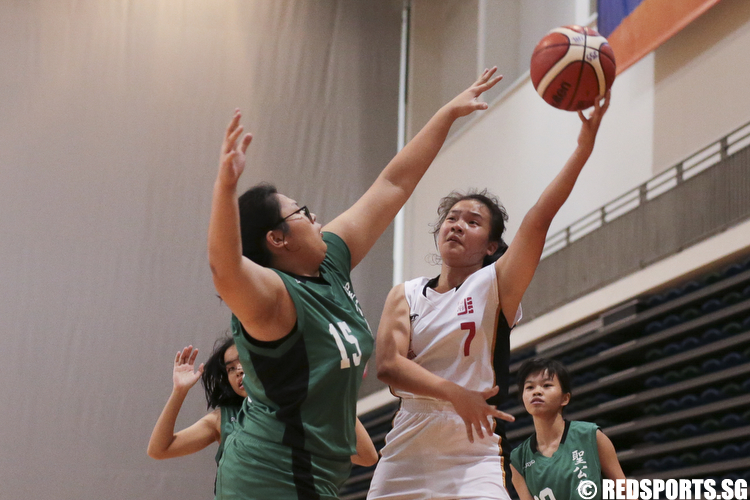 OCBC Arena, Friday, March 23, 2018 — Defending champions Jurong Secondary (JSS) remained undefeated in the nationals and sealed top spot in Group P after a 41–36 victory over Anglican High School (AHS) in the preliminary round of the National B Division Girls’ Basketball Championship.

Jurong and Anglican High have already earned a spot in the elite eight after triumphing in each of their first two matches and this game was all about bragging rights in topping the group.

Despite the loss, captain Aw Zi Yann (AHS #11) felt that her team put on a commendable display.

“I felt that everyone played well today, especially in terms of our shooting and on defence. They (Jurong) are a strong team but we were able to match up to them and keep the score close despite the loss,” she said.

Their shooting was impressive indeed, as Kimberly Tay (AHS #11) knocked down four three-pointers and outscored the entire Jurong team in the opening quarter to give the East Zone Champions a 12–11 lead.

When quizzed about her magnificent shooting in the opening quarter, a humble Kimberly (AHS #7) simply said, “I didn’t want to think about it too much because it would have affected my performance for the rest of the game.”

Anglican High’s game plan was based around a small-ball lineup and three-point shooting, while Jurong aimed to attack the paint and take advantage of the superior height advantage of Loh Yu Xian (Jurong #13), who bagged 14 points to lead all scorers.

Both teams executed well throughout the game, as evident from the fact that nine of Anglican High’s 12 made field goals came from three-point land. On the contrary, Jurong did not make a single three-point field goal all game.

In the end, it was all down to executing down the stretch.

Trailing 36–39 and with possession of the ball, Anglican High failed to score on a three-point attempt before Loh Yu Xian grabbed a key offensive rebound on the ensuing possession to score the final bucket of the game with seven seconds left. That gave the West Zone runners-up a five-point lead and effectively put the game beyond Anglican High.

A delighted Valerie Lim (Jurong #7) was glad that Jurong pulled off their third win in five days and she also paid respects to their opponents for a good game.

“I think it was a tough game. Anglican High is a very strong team, especially in their three-point shooting. I think both teams played well. Going into the second round, we hope to continue our winning streak,” the Jurong captain said.

Anglican High, likewise, hope to progress beyond the top eight as they enter the business end of the tournament. “We hope to make the top four and we will be taking one game at a time,” said Zi Yann (AHS #11).

Anglican High will face three North Zone teams in the last eight after they were drawn into the same group as Singapore Chinese Girls’ School, North Vista Secondary and Yishun Town Secondary.

Jurong will have a chance to avenge their heart-breaking West Zone final defeat to Nanyang Girls’ High School after the past two national champions were paired in the same group, which also includes National Junior College and Chung Cheng High (Main).