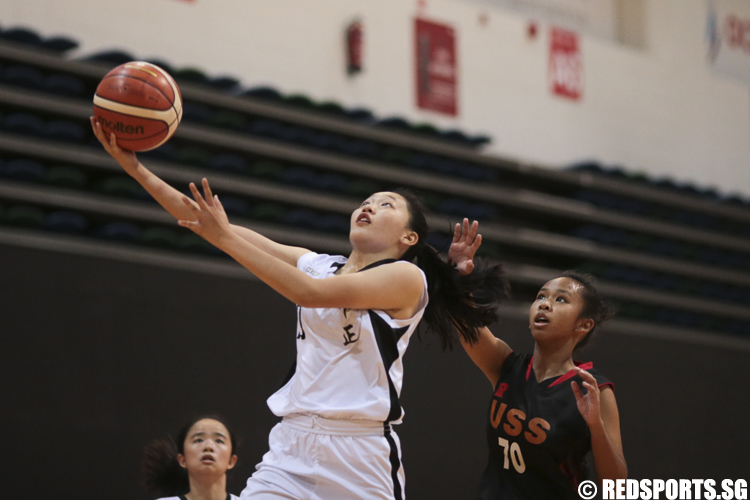 OCBC Arena, Thursday, March 19, 2018 — Chung Cheng High (Main) [CCHM] outlasted Unity Secondary (USS) in a second-half showdown to earn a 39–37 victory in Round one of the National B Division Girls’ Basketball Championship.

As soon as the ball was tipped, Unity got to work and attempted an early trey but could not score the opening basket.

As Chung Cheng High started to play more aggressively, Unity found it difficult to score even though they could often work the ball into the paint.

Neither team gave their opponents any loopholes to capitalise on.

However, Unity struggled with foul trouble and gave their opponents five free throw attempts. Yet, Chung Cheng High could only score one out of that five attempts and failed to make the most of their chances to extend the lead.

(USS #44) then beat the buzzer shot to give her team a slight first-quarter lead at 6–5.

Boxing out proved to be key in Chung Cheng High’s huge offensive rebound numbers but they were unable to convert their under basket shots and were at times forcing shots on the offensive end.

Chung Cheng High knew that the only way to extend their lead was to force the issue on offence and focused mainly on their ball movement to do so, giving themselves a 14-9 lead at halftime.

Facing a half-time deficit, coupled with Chung Cheng High’s valiant attempts to draw fouls whenever they went up for layups, Unity’s spirit faltered.

Unity became wary of giving up fouls and suffered on the defensive end, allowing their opponents to capitalise by widening the scoreline.

Putting Alayna (USS #11) back in the game gave Unity a glimmer of hope as the all-rounded player led her team in executing set plays. She played to the best of her ability and hustled hard to gain every possession but Unity still trailed 21–33 in the second half.

In the final quarter, with all still to play for, Unity heated up on offence and made their rivals fumble badly with good defence, allowing Unity to reduce the deficit and force a timeout by Chung Cheng High.

With two minutes left on the clock, both teams were desperate in outscoring their opponents to get a crucial victory.

Both teams went coast to coast to score on the break and it was an emotional roller coaster for both teams late in the game. Both coaches had to signal for timeouts to stop the momentum of the scoring team.

As a last resort to regain the lead, Unity focused on drawing fouls to get to the free throw line and they successfully closed the gap to two points.

Chung Cheng High improved to a 1-0 win-loss record in the First Round of the Nationals. They will play Singapore Chinese Girls’ School next while Unity drops to a 0–1 win-loss record.

Shannon Chong (CCHM #12) said, “We did well on our teamwork and ball movement. However, our defence was not up to standard today. We have to focus and be more confident for the next game.”

“We all have the same goals of making the Top Four, so let’s try to do it to the best of our efforts,” she added.

Despite the loss, Alayna (USS #11) had positive things to say about her team’s performance. “Even though we were losing, we never gave up and we fought back. Whether we are losing by ten or twenty points, we should never give up until the end and fight on all the way. Anything can happen. In the third quarter, we were behind by 13 points and to come back and only lose by two points is actually a very big achievement for us.”

“One mistake we made today was that we kept fouling them in the first quarter. Instead of shuffling our feet, we kept reaching in and got ourselves into foul trouble. Things changed for the better in the final quarter and our strong mindset was the thing that encouraged us,” she added.

Unity Roster
We asked but did not receive the roster for Unity Secondary. If you know any of the players, Kindly leave a reply and we’ll update the post.