National B Div Vball: Shuqun’s determination carries them to 2-0 victory over Punggol 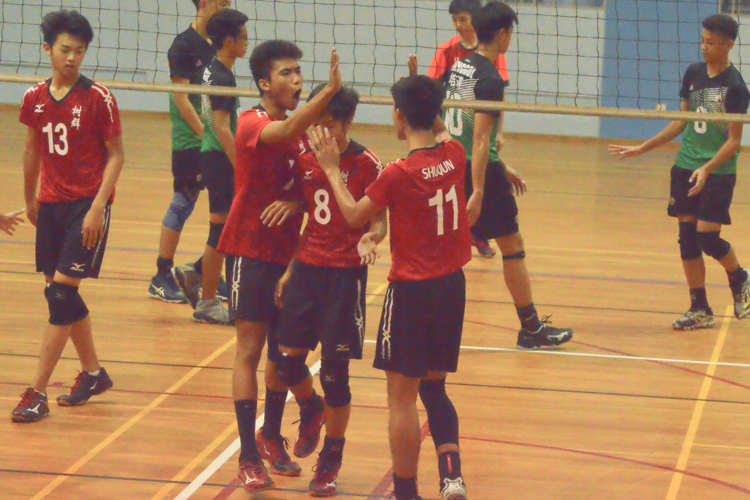 Presbyterian High School, Tuesday, March 6, 2018 — Shuqun Secondary’s (SQS) grit in the second set propelled them to a 2-0 win over Punggol Secondary (PGS) in the National B Division Volleyball Championship.

After their victory, Shuqun’s Zulfadli (#7) said the team played well, following their loss in the previous match.

Despite being pleased with the victory, Shuqun’s Zulfadli felt there were still things that the Shuqun team could work on, such as their reaction timing.

“My team played well today. We could have won in the previous match, but we did not play up to our standard. Our energy levels were there today so we did well,” said Zulfadli.

“However, we can improve on the small little mistakes that we make. Our reaction timing as well. Serve and receive is good but there is definitely room for improvement.”

Both teams started off hungry as each fought with different strategies to take the lead.

With their huge height advantage, Punggol cleared repeated open spikes easily and went on to take an early lead, leaving their opponents helpless.

However, with a slight change of gameplay, Shuqun advanced with fakes and spikes to reduce the deficit.

Each team was neck-and-neck in the first set and was determined not to commit any mistakes for their opposing team to take advantage.

Further playing it slow, Shuqun played the game to their pace to restrict their opponents, ending the first set at 25-22 with a spike to the baseline of the court.

Coming into the second set with a different approach, Punggol would out fake their opponents during spike opportunities by allowing their player from the back to hit instead of the front player. This confused Shuqun and slowed them down.

But Shuqun’s team spirit shone through as Zulfadli (#7) and Lachlan (#11) led their team with spike kills to further dominate their opponents.

It was score after score as Shuqun left their opponents scoreless.

Eventually, Shuqun clinched the victory when a service to the opposing team led to a flimsy receive from Punggol and ended the game with 25-13 at 2-0.

Punggol Roster
We asked but did not receive the roster for Punggol Secondary. If you know any of the players, kindly leave a reply and we’ll update the post.