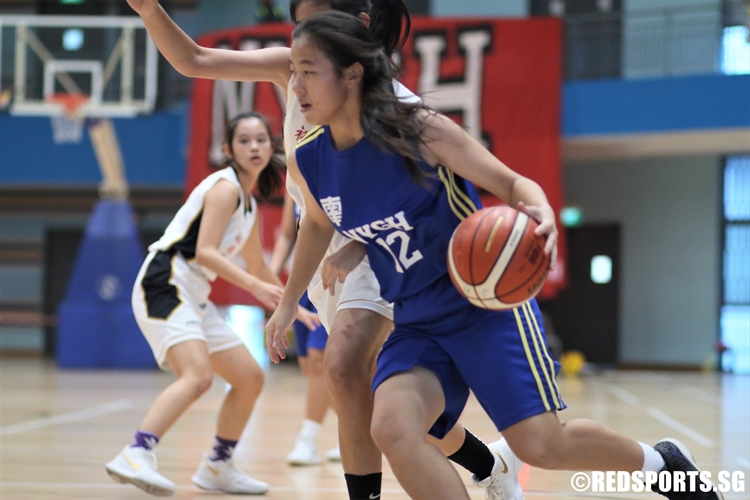 Yang Shixuan (NYG #12) beats her defender on a baseline drive. She had a game-high 25 points in the win. (Photo 1 © Chan Hua Zheng/Red Sports)

“My teammates were counting on me to make the shot and I’m happy I didn’t let them down,” remarked Shixuan (NYG #12) after her game-winning free throw with one second left in triple overtime secured Nanyang Girls’ first zonal title since 2015.

“I’m excited to get the win. Everyone was determined and we played really hard to get the title,” added Shixuan (NYG #12), who is also the team Captain of Nanyang Girls’.

“I felt that we did our best. We made some mistakes but we covered up for one other. It’s a commendable effort by the team, we want to improve and strive to become national champions,” said Loh Yu Xian (JSS #13).

Both teams had opportunities to win the game before Shixuan (NYG #12) settled the contest in triple overtime.

Shixuan (NYG #12) had sent the game to overtime earlier when she made one of two from the line to tie the game at 49–49 with 14 seconds left in regulation.

Jurong held a 56-51 lead midway through the first overtime period but Nanyang Girls’ came roaring back, courtesy of a three-pointer from Rachel (NYG #31) and a fast-break lay-up from Emi (NYG #34), to send the game to double overtime.

Nanyang Girls’ were up 67–65 in double overtime when Jurong had 13.5 seconds left to rescue the game coming out of a timeout.

Jurong immediately fed Valerie Lim (JSS #7) at the high post and she made a scooping lay-up in the lane with 10 seconds to go as the Jurong bench went into raptures.

Nanyang Girls’ had a chance to win it but Michelle Heng’s (NYG #35) clean look from deep came up short at the buzzer, bringing up triple overtime.

“It can get really demoralising when the opponents equalise immediately after we score, but the girls stayed really focused throughout the match,” said Dr Lim Shi Min, teacher-in-charge of Nanyang Girls’ Basketball.

With the score tied at 71–71, Valerie Lim (JSS #7) missed a left-handed lay-up before Nanyang Girls’ immediately broke away in the open court.

Emi (NYG #34) missed a lay-up but Shixuan (NYGH #12) was on hand to grab the offensive rebound before she was fouled with one second remaining on the clock. She headed to the line for two with Jurong in the penalty.

One was all she needed and Shixuan (NYG #12) coolly delivered on her second free throw attempt to hand Nanyang Girls’ the title with an enthralling 72–71 victory.

Dr Lim believes that the strong relationship between the players and their coach made the difference down the stretch.

“I would attribute this victory to the close bond between the girls and their coach, who provided them with mental support throughout. The girls put in so much effort and played with so much determination. I’m definitely happy with the outcome and I’m so glad that we won,” she said.

This marked the fourth straight year Nanyang Girls’ and Jurong have met in the zonal final. Having gotten one over their rivals, Nanyang Girls’ have high hopes for the National B Division Girls’ Basketball Championship.

“We hope for a top-two finish and it will be even better if we can become national champions,” said Shixuan (NYG #12).

As the defending champions in last year’s National Championship, Nanyang Girls’ only managed a top-eight finish and coincidentally relinquished the national title to Jurong. The National B Division Girls’ Basketball Championship will begin after the March School Holidays.