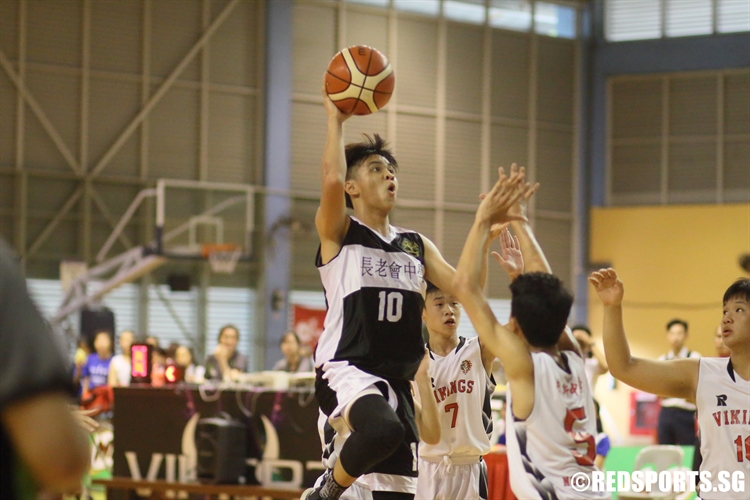 Tang Kah Wai (PHS #10) rises for a floater over the defense. He poured in a game-high 23 points in the defeat. (Photo 1 © Chan Hua Zheng/Red Sports)

North Vista made 11 three-pointers, including buzzer-beating treys to end the 2nd and 3rd quarters, on their way to reclaim the North Zone title. This was their third title in four years having beaten Ahmad Ibrahim Secondary and Bowen Secondary in the 2015 and 2016 final respectively. Getting one over their rivals in the Championship Game, however, definitely felt different.

“We faced a lot of pressure as the defending national champions and every team wants to beat us. We are very happy that we won and avenged our second round loss to Presbyterian High at the same time,” said Reuben David (NV #30).

Aaron Chaw (PHS #26) and Tang Kah Wai (PHS #10) both scored 23 points to lead all scorers while Kovan Toh (PHS #5) chipped in with 17 points for the defending champions.

The opening quarter alone saw five lead changes and five ties; it was a tight affair as neither team was able to make it more than a one-possession game.

Presbyterian High took control in the 2nd quarter, dominating the paint and had three “and one” opportunities as North Vista struggled with foul trouble in the quarter. Presbyterian High twice built a double-digit lead but Reuben David’s (NV #30) three-pointer at the buzzer meant they only held a 45–36 lead at halftime.

North Vista did not regain the lead as Aaron (PHS #26) went on a solo 7-0 run to put Presbyterian High back up 63–56. Amos (NV #7) then grabbed a long offensive rebound and sank a three-pointer at the buzzer from way beyond the arc, as North Vista kept themselves within striking distance after three quarters played.

In an end-to-end game which was unpredictable until the very end, Amos (NV #7) made one of two from the line to put North Vista up 69-68 midway through the final quarter. This was North Vista’s first lead since they were up 22–21 in the 1st quarter.

The contest was not over just yet, as Tang Kah Wai (PHS #10) connected on a three-pointer from the right wing to make it a two-point game at 82-84 with exactly a minute on the clock. Justen Chiam (NV #11) immediately went the other way and scored with a floater to make it a two-possession game.

Presbyterian High failed to score on the ensuing possession before Tang Kah Wai (PHS #10) was called for an unsportsmanlike foul that sent Dillon Ong (NV #9) to the line. He made one of two to give his team an 87–82 lead plus possession of the ball with 25 seconds remaining.

Foo Yong Ming (PHS #12) made a lay-up in the dying moments of the match to cut the deficit to three, but Presbyterian High could not buy another possession before Reuben David (NV #30) tossed the ball up in the air as time expired to secure a rousing comeback victory for North Vista.

North Vista acknowledged that their fighting spirit helped them back into the game.

“Although we were down by 13 at one point, we fought really hard and never gave up,” said Chan Qi Feng (NV #3).

North Vista will now hope to go from strength to strength in the upcoming National B Division Basketball Championship where all eyes will be on their bid for a three-peat.

Presbyterian High lost for the first time this season as their quest to defend the North Zone crown came up short. Presbyterian High had beaten North Vista 63–59 when the teams met earlier in the second round. Both teams now hold a 10–1 record for the season.

The National B Division Basketball Championship will begin after the March holidays. North Vista are the two-time defending National Champions while Presbyterian finished 3rd in last year’s competition.