National B Div Floorball: Greendale dominate 7-2 over Crest in first round face-off 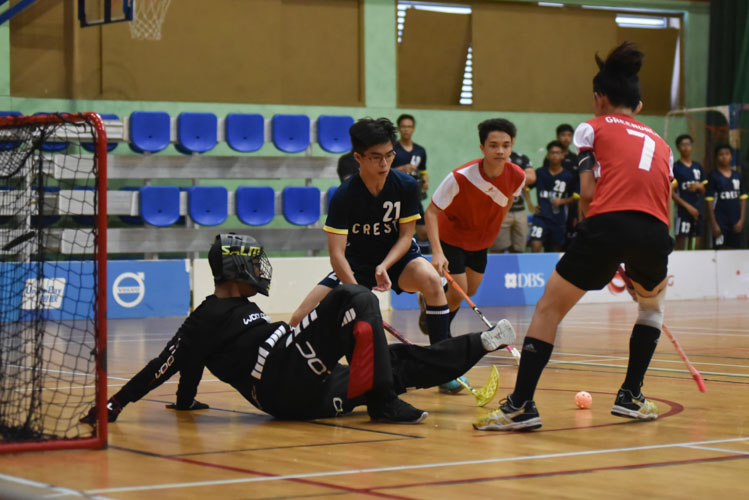 Lee Jia Liang (Greendale #7) manouevres past the defenders to shoot the ball into the goal. (Photo 1 © Cara Wong/Red Sports)

With this win, Greendale improved to a 3-2 win-loss record while Crest dropped to 2-3. Both teams have six points in Group C.

Crest started off playing defensively and was seen constantly staying near their goalpost but a brave Muhammad Haiqal (CS #48) shot from far took the lead just 20 seconds into the game.

Daniel Alexander (GD #90) fired back but was blocked by Crest custodian Mohamed Yusri (CS #22). Lee Jia Liang (GD #7) then helped to clear the equaliser shot with a clutch flick.

Without sparing any chances, Mirza Nazirul (GD #19) fired in the second shot thanks to his quick thinking after the offensive ball deflected back the crossbar.

Greendale’s goalie, Lee Chang Han (GD #1) stayed on high alert and denied all three of his opponents’ advances, pushing the turnover to his advantage.

With valiant attempts from Greendale, their ball movement led them to outrun their opponents and it was followed through by Sylvian Yin (GD #9) who let the opportunity slip as he fired high due to being nervous.

Greendale was up 2-1 in the first period.

With Greendale playing aggressively, it did not take long for them to get a pushing foul as Sylvian Yin (GD #9) was sent to the sin bin, forcing his team to play with one man down.

Even with one less opponent on the court, Crest continued wasting precious chances by firing high.

Greendale, however, took advantage through Muhammad Mikail (GD #10) as he took a shot when the opposing goalie was daydreaming.

The tide turned when Muhammad Mikail (GD #10) fouled and was sent to the sin bin, reducing his team down to four players. This caused his team to continuously be forced to tight corners by their opponent’s two-on-one man defence.

At halftime, Crest found themselves trailing 1-3.

The final period saw Crest coming in with a cautious approach, as they stayed at a close distance to wait for the right moment to steal the ball instead of rushing to obtain possession.

However, it was not long before Greendale grouped up and led Muhammad Syauqii (GD #32) to a clutch shot straight into the net.

Things went downhill for Crest as their player Muhammad Azrin (CS #18) committed a pushing foul which led him out of the gameplay.

But there was a glimmer of hope for the Crest players. Greendale’s Sylvian Yin (GD #9) was sent to the sin bin for the second time and the Crest players responded by rethinking their set play to push the offense.

Unfortunately, with the huge deficit in the earlier two periods, Crest found the effort to be too gruelling.

Eventually, to top it all off, Lee Jia Liang (GD #7) sealed the game with a goal from half-court to end the game 7-2.

Said Mirza Nazirul (GD #19), “My team communicated well today and we were having lots of fun. As this might be our last game, we told ourselves to give 110 percent and do our best.”

“We can definitely improve on our passes, the way we bounce down the boards and the speed of our passes. We should always look to our offence blade-side to pass the ball instead of just passing the ball without thinking,” said Muhammad Mikail (GD #10).