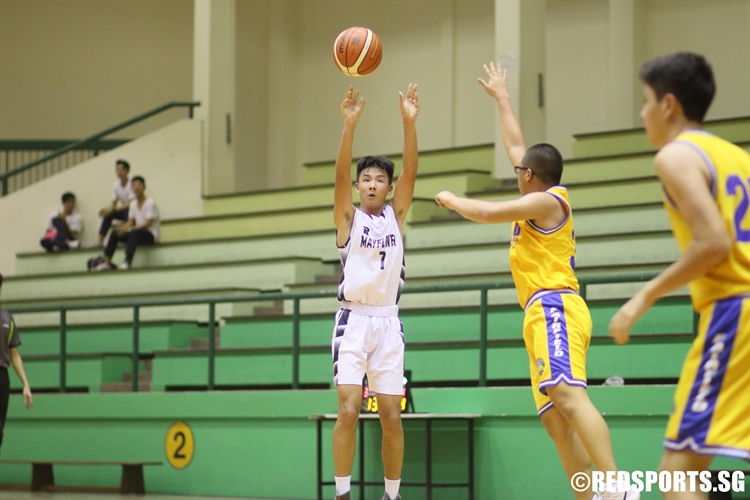 Azel Tsai (MFSS #7) pulls up for three over his defender. He finished with a game-high 22 points despite the defeat. (Photo 1 © Chan Hua Zheng/Red Sports)

Delta Sports Hall, Monday, February 26, 2018 — Fairfield Methodist School (FMS) handed Mayflower Secondary (MF) their first loss of the season with a 75-57 victory to book their place in the South Zone B Division Basketball Championship Final for the first time since 2015.

Having gone down 47-46 to Mayflower in a preliminary round match, Fairfield clearly had revenge on their minds.

“We had more energy for this game and we played really hard,” said Fairfield Captain Jonathan Ang (FMS #9) when quizzed about what they did right this time against Mayflower.

That proved to be the difference as Mayflower were often too reliant on Azel Tsai (MF #7) and Joshua Kirt (MF #11) to produce the goods on the offensive end, frequently resulting in scoreless possessions whenever their key men were denied the ball. Azel (MF #7) had 22 points to lead all scorers while Joshua (MF #11) added 14.

Team Captain Azel (MF #7) led by example early on as he scored five quick points to give Mayflower a 7-2 lead in the early minutes of the game. Fairfield settled into the game gradually and got a lead that they would not relinquish when John Vannan’s lay-up (FMS #10) put them up 8-7. Fairfield went from strength to strength to build a 20-13 lead at the end of one.

Fairfield then took complete control in the 2nd quarter with some outstanding defence. Azel (MF #7) could not buy a basket in the quarter as Fairfield’s game plan of rotating Jeremy Graves (FMS #33) and Tan Wen Jun (FMS #31) on him worked a treat. Mayflower scored just five points in the quarter while 14 points from Fairfield in the same period was enough for them to build a 34-18, double-digit lead at halftime.

Mayflower had their chances in the second half but could not score at the crucial moments. Twice they had the opportunity to cut the deficit to single digits at 49-59, but Azel (MF #7) first missed a three-point attempt before the ball rimmed out on a floater in the paint from Joshua Kirt (MF #11).

Fairfield scored from the free throw line when it mattered to end hopes of a Mayflower comeback as 10 of Fairfield’s 20 points in the final quarter came from the charity stripe.

Fairfield became the first team to defeat Mayflower this season after avenging their loss in the first round and also reached the final for the first time since 2015 when they took home the Championship. This milestone proved to be of huge importance to the Fairfield team.

“It is significant because we want to make the finals on a consistent basis. We missed out on the final in the last two years and it was more important for us to get there this year. We have consistently been in the top four for the past six to seven years but getting to the final is always our goal,” said Eddie (FMS #13).

Fairfield will play Anglo-Chinese School (Barker Rd) in the final and know that they will have to be at the top of their game if they want to overcome a team that had just defeated them in the second round on February 20.

“We have lost to them once so we know we have to work hard. Even though we talk about revenge, it will not affect how we play because we know that ACS barker is a strong team. We hope to beat them this Thursday with consistency,” declared Eddie (FMS #13).

The final will tip-off at 2.30pm on March 1 at Delta Sports Hall.