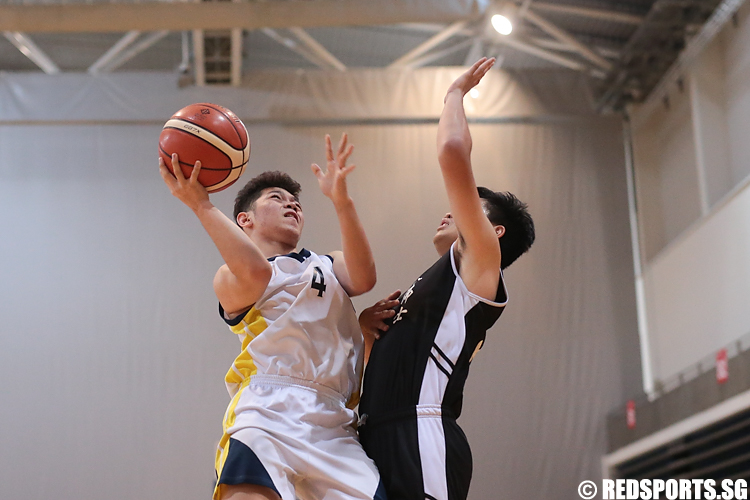 OCBC Arena, Tuesday, February 20, 2018 — Guangyang Secondary (GYS) made their free throws count in the final quarter to outlast Raffles Institution (RI) 56–49 in the second round of the South Zone B Division Basketball Championship.

Guangyang won the opening tip and scored the first bucket of the game with a jumper.

In retaliation, Raffles displayed good team chemistry and drew plenty of fouls in the opening 10 minutes to put their opponents in foul trouble.

Raffles defended cautiously and purposefully, as they never lost sight of the ball and vied hard to regain possession of it whenever they were given the chance.

However, Raffles began to get nervous and failed to convert their shots as Guangyang stepped up their aggressiveness.

Both teams went into halftime tied at 27.

Both teams were inseparable again after 10 more minutes on court, as Raffles and Guangyang scored nine apiece in the penultimate quarter.

Raffles drew clever fouls from their opponents and hoped to regain the lead from the free throw line.

However, their plan backfired when Guangyang extended their lead by playing the game to their pace.

Raffles were unwilling to give up even though they were down and Andre Lim (RI #11) forced the issue on the offensive end late in the game.

Raffles wasted precious seconds before failing to attempt a shot as the shot clock expired and conceded possession to their opponents. Guangyang then went the other way to widen the score.

Andre Lim (RI #11) said, “Despite our loss, my team still fought really hard against the better team. We were leading in the earlier parts of the game but we panicked in the later part, letting the game slip away.”

Raffles’ task was made tougher when point guard Raehan Sanuda (RI #4) fouled out of the game.

Guangyang eventually took home the 56–49 win with a triumphant celebration after a tough fight while their rivals comforted one another on court.

Guangyang’s Captain Jackson Kong (GYS #0) said, “My team gave a lot of energy today. Even when we lost the ball, we just reset our plays.”

“Good job guys, keep it like that,” he added.

“What we need now is more experience. There were many free throws that we could have made but we missed. We could have used that to our advantage to take hold of the opponents to make baskets. We could have fought harder and I believe that even though we lost, we still put in a lot of effort today,” Andre (RI #11) said.

His message to his team, “This loss should not dishearten us. We should continue to work hard and get into the top 4 in the next few games.”

With this win, Guangyang improve to a 2–1 win-loss record with their only loss coming against Mayflower Secondary in the second round. They will play Peicai Secondary next while Raffles dropped to a 2–2 record, finishing with 6 points and 3rd place in Group P.