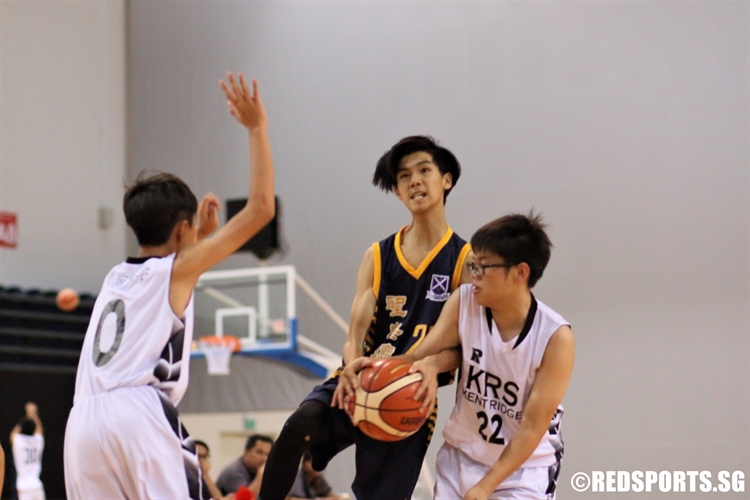 Javier Lim (SAS #26) drawing contact as he goes for a lay-up. He finished with a team-high 19 points in the victory. (Photo 1 © Chan Hua Zheng/Red Sports)

OCBC Arena, Tuesday, February 20, 2018 — St. Andrew’s Secondary (SAS) clearly had a point to prove after falling to Anglo Chinese School (Barker Rd) in their previous match, and they played with a chip on their shoulders in a 65–33 victory over Kent Ridge Secondary (KRS) in the second round of the South Zone B Division Basketball Championship.

“We wanted to play hard and fast. I think we did well in those areas today,” said Captain Samuel Chua (SAS #6)

St. Andrew’s did not just find success in the open court, however, as the Saints ran an efficient half-court offense which often found their shooters for open looks beyond the arc. Javier Lim (SAS #26) made the most of his chances, sinking three three-pointers on his way to record a team-high 19 points in the win.

Kent Ridge ran their offense mostly through #23, and he duly kept them in the contest with some good offensive play. He scored a game-high 20 points including 11 in the 4th quarter.

St. Andrew’s took control in the 2nd quarter, outscoring Kent Ridge 15–2 as their full court pressure was too much for their opponents to handle.

Despite facing a 19-point halftime deficit, Kent Ridge refused to go down without a fight. Behind a strong performance from #23, Kent Ridge put up 14 points in the 4th, their best offensive output of any quarter.

Kent Ridge dropped to 0–3 in the second round ahead of their final match against Yuying Secondary on February 22 at OCBC Arena. The match will tip-off at 2.30pm.

St. Andrew’s improved their second round record to 2–1 and wanted to pay tribute to their injured teammate with this victory.

“We want to play harder and faster than we did today. We have to be more efficient than Fairfield on the day,” Samuel (SAS #6) on how his team can claim victory in their crucial match against Fairfield Methodist.

The winners will earn a spot in the semi-finals and the chance to feature on the national stage. The match will tip-off at 2.30pm on February 22 at OCBC Arena.

Kent Ridge Roster
Red Sports was unable to get hold of Kent Ridge Secondary School’s roster. If you know any of the players, kindly leave a reply and we will update the story accordingly