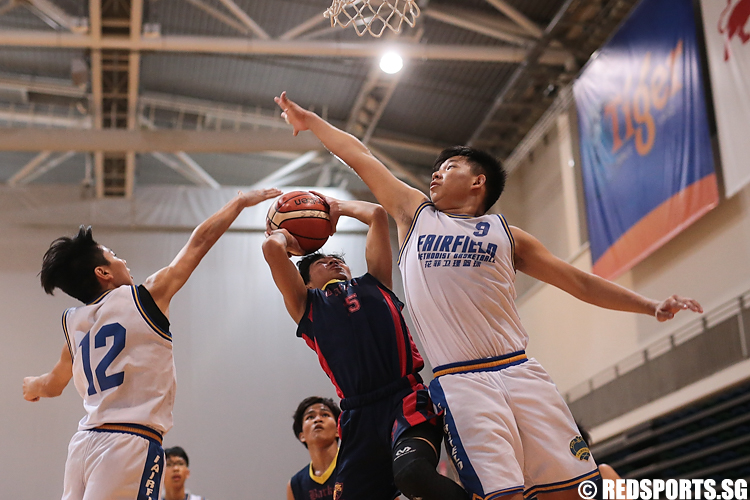 OCBC Arena, Tuesday, February 20, 2018 — A third quarter run from Anglo-Chinese School (Barker Road) [ACSB] pushed them past Fairfield Methodist School (FMS), securing a 67-53 victory in the second round of the South Zone B Division Basketball Championship.

The opening tip was won by ACS Barker. Knowing that they were at a height disadvantage, ACS Barker relied on their speed to outplay their opponents.

With both teams focused on scoring through fast-break opportunities, both sides had to dig deep to create open looks at the basket.

However, he was would soon encounter resistance from ACS Barker’s double-team, as Fairfield ended the first quarter trailing 11–14.

Neither team was able to pull away from the other by more than three points in a close battle.

Fairfield would continue to score on fast-breaks while ACS Barker controlled the offensive rebounds for second chance points.

It became a point-war between both teams that put the spectators on an emotional roller coaster whenever each side traded baskets.

Relying on a full court press to stop their opponents, Fairfield did so with great success and forced ACS Barker into constant turnovers.

At halftime, ACS Barker was slightly ahead at 30–25.

Fairfield stepped up on their ball movement in the second half, as they played quicker on offence and successfully drew fouls to earn free-throws attempts.

Led by a sudden outburst on both ends of the court, ACS Barker scored many buckets in quick succession while denying Fairfield any chances to score, so much so that ACS Barker led 51–36 heading to the final quarter.

ACS had the ‘make-it-count’ mentality in mind and hustled hard to increase their lead.

Panca (#15) from ACS said, “We did our best and put in lots of teamwork compared to the other games.”

Despite the double-digit deficit, Fairfield’s defence remained solid and managed to stop their opponents from extending the lead. Fairfield was then able to use full court passes to create open shots as they successfully narrowed the deficit.

However, with ACS applying heavy pressure, Fairfield was eventually overwhelmed mentally when a shooting foul was committed and gave ACS another three free-throws to seal the game at 67–53.

“We played differently today based on teamwork. In our previous games, there was not much teamwork so today was definitely better,” said Khant Zay Naing (ACSB #8).

Despite the outcome, Fairfield’s captain Jonathan Ang (#9) still believed in his team.

“We did okay but it was still not our best. We can definitely improve on our defense, communication on court and full court presses,” said John.

With this win, ACS remains undefeated with a 4–0 win-loss record in the second round. They will advance to the semis as first-place finishers in Group Q while Fairfield Methodist dropped to a 2–1 record. They will play St. Andrews next.