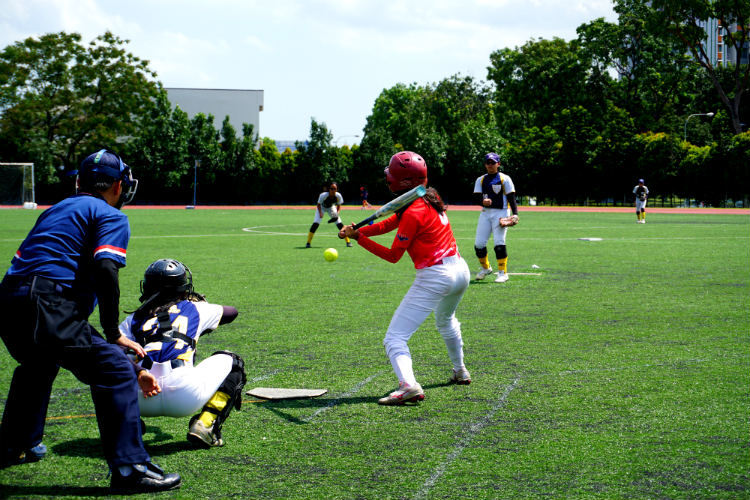 River Valley, which has been consistently ranked in the top four nationally in previous years, put up a comparatively stronger batting performance but their unstable defence ended up costing them crucial runs and ultimately the game against an “anxious” Nanyang Girls team.

“Honestly, we were quite anxious because RV is like seeded, right? And then we have already lost one game so if we lose another game we are out. So we were very, very, very anxious,” said Nanyang’s Captain Emma Lim (NYGH #24), who added that her teammates’ morale went up only after they were leading 3-0.

“At first, the morale was super low and then after we were up (3-0), actually we were thinking that, ‘I think we got chance’,” she said.

The game started off with neither team being able to score in the first inning despite a few hits being made by both sides.

In the second inning, however, River Valley could not make any hits, leaving them with no chance to score. Likewise, Nanyang’s initial attack fell short as they quickly found themselves with two down and only Rachel Tan (NYGH #20) on base. However, Nanyang got lucky when Angel (RVHS #07) and Gwen Tan (RVHS #71) failed to catch Cyndi Tiong’s (NYGH #07) fly ball after colliding into each other, allowing Rachel (NYGH #20) to score Nanyang’s first run.

Following Cyndi (NYGH #07), Leon E Shuan (NYGH #28) managed to land on base due to River Valley’s third baseman momentary lapse of concentration. Emma Lim (NYGH #24) then brought the two runners home with her long hit over centre field. But Nanyang’s scoring streak was brought to a halt when Ng Wen Ying (RVHS #29) caught the next batter, Bi Yu Ying’s (NYGH #36) line drive to second base.

With three runs down, River Valley came into the third inning determined to score. They started off with Yanan’s (RVHS #03) solid hit to left field which earned her a single. Despite their next two batters being called out, River Valley remains unfazed and continued to attack with resolve. Jia En (RVHS #08) and Zelyn Chong’s (RVHS #23) hits landed them on base as the Nanyang fielders started to falter under the pressure. River Valley finally scored two runs when Lim Jazz Ying (RVHS #88) made a hit to centre field, bringing her teammates home.

River Valley forged on with their batting rally but unfortunately, they could not tie the score despite having bases loaded.

On the other hand, Nanyang was unable to extend their lead in the third as well as the fourth inning. River Valley’s pitcher Zelyn Chong (RVHS #23) played a big part in this as she continued to pitch well, cleverly utilising her change-up at times to mislead Nanyang batters.

The fifth inning was River Valley’s last chance to at least tie the score up. Zelyn Chong (RVHS #23) was the sole hope, being the only one who was able to make it on base with her hit to centre field. She made it all the way to third base with one down. Unfortunately, River Valley could not break through Nanyang’s solid pitching and catching combination, allowing Nanyang to take the win.

With this result, Nanyang remains in the running for a spot in the playoffs with two games left to be played. River Valley’s upcoming game with Nan Hua will most likely determine which two of these three schools will advance to the playoffs.