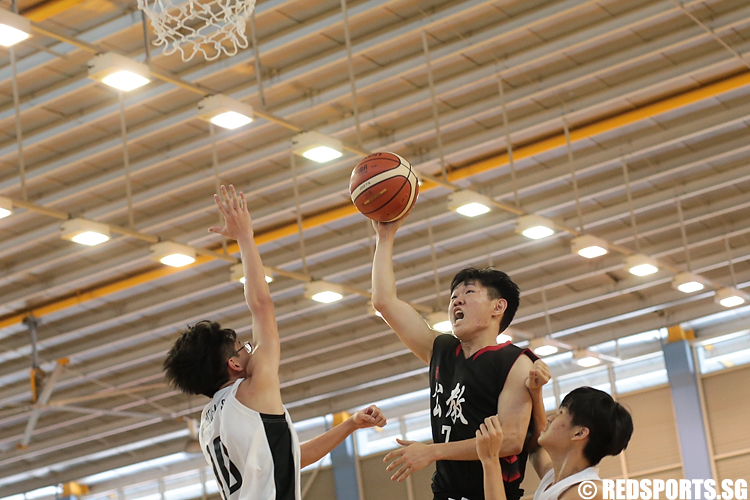 Singapore Basketball Centre, Monday, February 12, 2018 — Catholic High (CH) caught fire from beyond the arc, pouring in 12 three-point field goals as they cruised to a 71–31 victory over Edgefield Secondary (ES).

With this victory, Catholic High now have a 3–1 win-loss record while Edgefield fell to 0–4 in the second round of the North Zone B Division Basketball Championship.

Tan Zhi Kai (#9) led the way for Edgefield with a team-high of nine points, while Ong Jun Min (#11) and Zachary Ng (#5) chipped in six points and five points respectively.

The opening quarter started with Catholic High dominating both ends of the floor, as they made four of their five three-point field goal attempts and unleashed a suffocating full court press to fuel a 24–0 run.

Edgefield’s woes continued in the second period. They struggled to hit their stride on offence, forcing up difficult low-percentage shots, while committing turnovers that led to easy fast break points for Catholic High. At halftime, Edgefield trailed 4–38.

Despite facing a 34-point deficit, the second half saw a resilient effort from Edgefield as they found their groove on offence, relentlessly attacking the basket for points in the paint.

A competitive final period saw Edgefield going toe to toe with Catholic High, as they were only outscored 15–16. However, it was not enough to make up for their struggles in the first half and the final buzzer sounded with Catholic High securing a convincing 71–31 victory.

Edgefield will match up against Chung Cheng High (Yishun) on February 14 at 1.10 pm, while Catholic High will face against Presbyterian High on the same day at 2.20 pm. Both matches will be held at the Singapore Basketball Centre.