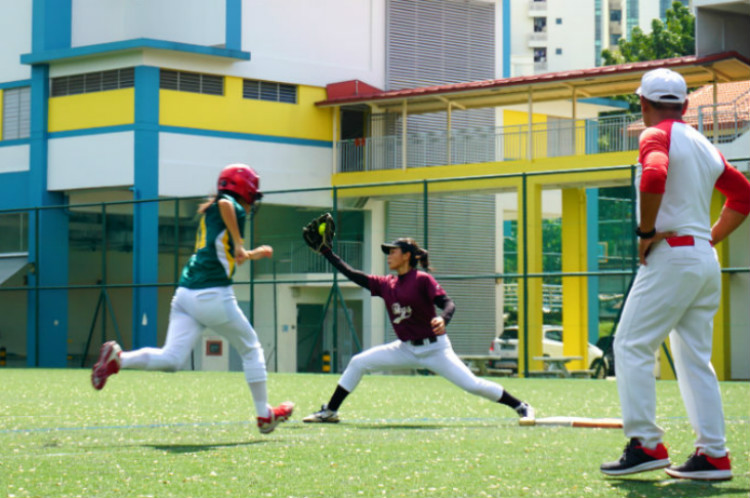 The first two innings of the match saw TKGS gain a substantial 7–0 lead over CGS. Josandi (TKGS #15) started off the TKGS’ first at bat with a solid single to left field. Josandi, along with Zi Hui (TKGS #7) were able to make it home, partially due to the errors made by the CGS’ fielders.

Amirah (TKGS #17) then made Wan Yu’s (TKGS # 11) hit to left field count with her aggressive steal of third base, putting her in a prime position to score TKGS’ third run.

In the second inning, consecutive hits by TKGS extended their lead by four runs. Most notably, Zi Hui (TKGS #7) made a solid hit to right field which earned her a two bases and allowed her teammate, Josandi (TKGS #15), to score.

Wan Yu (TKGS #11) made it to third base with two down, with her hard grounder through the CGS shortstop and left fielder to the out of bounds region.

Unfortunately for Wan Yu, CGS’ first base man, Regine (CGS #1), charged out to check Wan Yu (TKGS #11) during the next play to leave her stranded at third base.

With seven runs down, CGS had to make their third inning count and started attacking more aggressively. Regine (CGS #1) made a three-base hit to centre field and Caitlyn (CGS #23) scored the game’s only home run after persistently fouling the ball five times. Xiao Lian (CGS #99), along with the two of them, brought home CGS’ first 3 runs of the game.

However, the team’s batting streak was brought to a halt by a controversial strikeout called on Abigail (CGS #25) even though TKGS catcher Zi Hui (TKGS #7) seemingly dropped the third strike.

Despite the pressure, TKGS were able to retaliate with consistent hits, putting pressure on CGS’ defence and causing them to falter. They regained the runs they lost, ending the inning 11–3.

The top of the fourth inning passed by with CGS unable to recreate the magic they had in the third inning. With an eight-point deficit, allowing TKGS to score another two runs would take away their chance to play in the fifth inning. Thankfully, they conceded only one run, owing to an easy pop fly which was caught by Caitlyn (CGS #23). This gave CGS their third out in a do-or-die bases loaded situation.

The fifth inning was Crescent’s last chance to score but a three-up, three-down situation gave TKGS the 12–3 win.

CGS captain Adele (CGS #81) was proud of her team and said: “TKGS were strong opponents and seeing that the gap wasn’t too great, that shows that our hard work did pay off. Even though the team is sad, we should be proud of ourselves.”

Vice captain Regine (CGS #1) credited the team’s turnaround in the third inning to “a new found confidence gained” after their first at-bat, after realising that the team could hit against TKGS.

TKGS captain Zi Hui (TKGS #7) said: “We were very nervous when we came in, because their scoreline against Dunman High was very tight, so we knew we had to do well to win and advance to the next round.”

Vice captain Sheryl (TKGS #27) wanted their teammates to “learn from their mistakes from every game and keep up their team spirit in the upcoming games.”

CGS will play their final match of the season against National Junior College on February 23, while TKGS’ upcoming match with Dunman High on February 9 will determine which of the two will top their group.