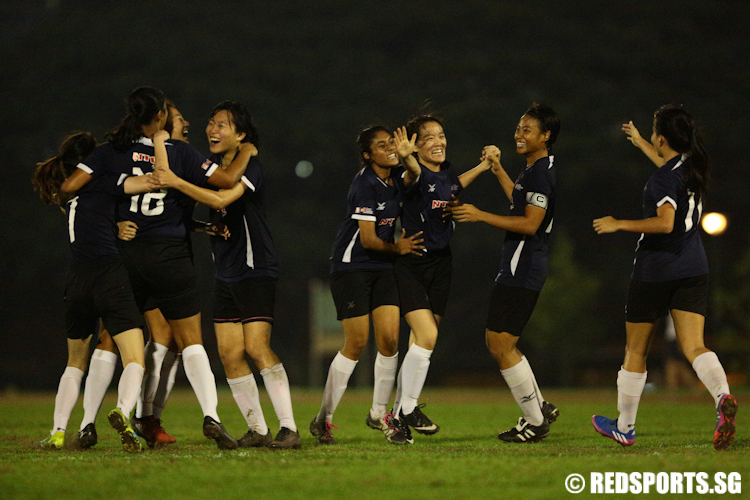 Said NTU captain Fatin Aquillah (NTU #10), “We had a goal in mind, it’s to win back the title we lost last year.”

“In the final, I don’t think I can focus much on their performance as it’s the result that matters. I felt that we could have definitely played better like the previous rounds, but today one goal is enough to seal the deal,” said Herman, NTU’s coach.

NUS was seen to be the stronger team in the first half, with their forwards driving their opponents into defensive play.

Despite the consistent attacks, NUS were unable to find space to put the ball into the net.

A corner kick in the 81st minute saw Yuan Yuan (NTU #5) scoring the winning goal after goalkeeper Victoria Tan (NUS #8) failed to hold onto the ball.

Despite the loss for NUS, they felt that they had improved a lot during the competition.

G. Sivaraj, NUS coach said, “I think from the first game till now we have improved a lot and I thought we really did very well. I thought we were the better team. It is really commendable for the effort these girls put in to grow as a team.”

“I think at the start we were still trying to figure out how to play together as a team. Today, it showed that we have the capabilities to play together as a team,” said NUS captain Faith Oh (NUS #7). “Although it was a pity that we conceded the goal and lost the final, I felt that we played really efficient today. There was much more chemistry, more attacking plays and we did well.”

Both teams have qualified for the Institute-Varsity-Polytechnic (IVP) Games together with Singapore Institute of Management (SIM) who finished third in the league.

NTU ended their season winning all five games played and scoring a total of 14 goals.