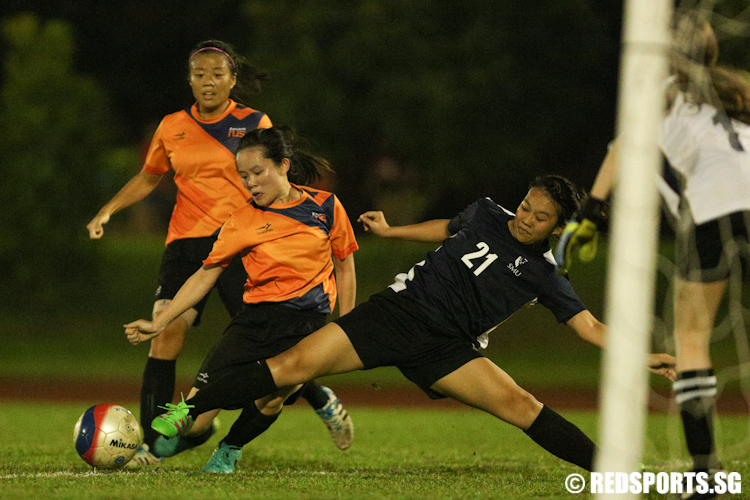 NUS spent a vast majority of the match camped out in their opponent’s half of the field, but it was SMU that scored first on a counter-attack through Lim Pei Ling (SMU #5) in the 13th minute. Joyce Foo (NUS #12) headed into the goal to equalise from a Hanna Westerling (NUS #17) corner kick just before half time.

“With this draw, we might still stand a chance to qualify for the finals,” said NUS captain Faith Oh. “Even though the result was not what we wanted because we were in the opponent’s half most of the time but didn’t manage to convert.”

NUS had started the match aggressively, but the girls were frustrated by stout SMU defending. Tay Pui Chin (NUS #13) was close to scoring a goal but denied by a sliding tackle from Caeley Tang (SMU #21) in the penalty box.

Both drew a blank in the second half, leaving NUS plenty to do if they were to qualify for this year’s final.

“We can work more on our communication,” NUS captain Faith said. “Talking more in the game and communicating with each other will allow us to make better plays. Another point to work on for us is to improve our finishing for us to score the goals we need.”

SMU ended their SUniG campaign with a win, a draw and two losses, while NUS has two wins and a draw. They will play Nanyang Technological University in their final match on September 18, with the final scheduled for Sept 21.

“I guess this team has been very tight. Although we lost the last two games, we gave it our all in the final game against NUS and the result definitely has shown,” said SMU captain Lee Lai Kuan (SMU #6). “It’s a very good and heartwarming way to end this season.”