SUniG Bball: NTU pull away in the fourth to secure 71-53 victory over NUS 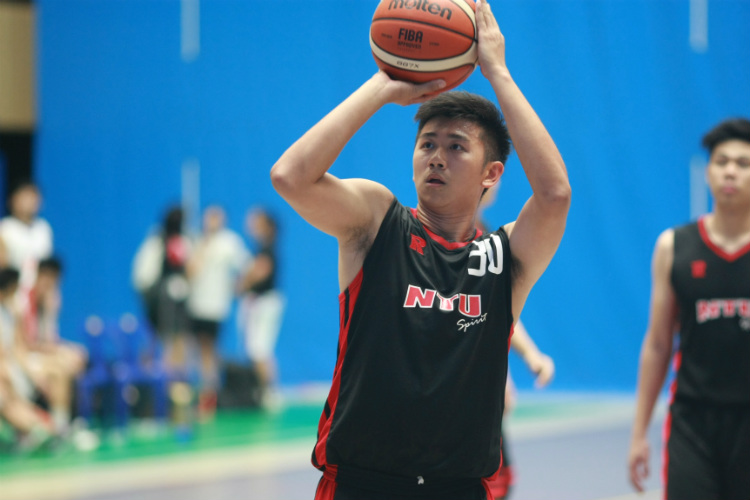 NTU The Wave, Friday, September 15, 2017 — Nanyang Technological University (NTU) pulled away in the fourth quarter to secure the 71-53 victory over National University of Singapore (NUS) in the Singapore University Games Basketball Championship.

NTU improves to a 2-0 win-loss record after defeating Singapore Management University (SMU) in their previous game. They will face Singapore University of Technology and Design (SUTD) in their next game.

On the other hand, this loss gives NUS a 1-1 win-loss record. They defeated SUTD previously and will be up against SMU next.

NUS got off to a strong start. They hustled on both ends of the court and were able to capitalize on their plays and second-chance points. Meanwhile, NTU had a cold start. Shots were not falling despite good plays being run. This allowed NUS to stay ahead and led 11-8 after the first quarter.

Using the momentum gained in the first quarter, Raymond Loo (NUS #13) came out hot in the second quarter. He scored the first 12 points for NUS, knocking down two three-point shots in the process. This fired up the NUS players as they fought and hustled harder in their plays.

Unfazed by that, NTU put up a fight of their own. As NUS scored, NTU would answer with a shot of their own. However, Sean Hoo (NTU #30) turned the tide by making a three-point shot and getting fouled in the process. He completed the four-point play and got the team and the crowd going. NTU increased their defensive intensity and were able to contain Raymond (NUS #13). NTU outscored NUS 21-20 in the second quarter but NUS still led 31-29 at the half.

NTU continued good play after play with Sean (NTU #30) leading the charge. He heated up and was knocking down threes. Sean (NTU #30) had a game-high 16 points.

“I think I needed to calm myself down after missing my first few shots and honestly speaking, the coach making me sit for a while really helped,” said Sean (NTU #30). “This allowed me to compose myself and calm myself down as I was rushing my shots earlier on. I got to give credit to my teammates definitely. It’s my fourth year playing at NTU and I got quite a few teammates who have been here with me for quite long as well. Practicing with them throughout the years and everything really helped a lot. They set good screens for me to allow me to get open. They also get me the ball at where I most like to shoot it from. So all the training together and talking about where we like to get the ball really help. It’s not me, it’s always my teammates. If they don’t give me the ball, I can’t shoot at all.”

Despite that, NUS were not discouraged and fought on to stay closely behind. NTU led 51-49 at the end of the third.

However, in the fourth quarter, NTU put the pedal to the metal and never looked back. They capitalized on the momentum gained in the third to up their defensive intensity and converting on the open shots they had. NTU played lock-down defense on NUS, only allowing NUS to score four points in the fourth while they scored 20 points of their own. NTU eventually took the game 71-53.

Captain Brian Wong (NTU #9) said, “So when we were down, what was going through our minds was just defense first. We knew that our offense weren’t flowing but if we could get stops, we could play fast to our strengths and gain momentum from there.”

Co-captain Seah Chin Seng (NTU #24) added, “This was very similar to our first game against SMU. We started off very slowly in the first quarter on both offense and defense. Especially on our offense where we rushed our plays. In the first few passes, we rushed the shots. Subsequently, in the second half, we picked up the pace and managed to catch up.”

Co-captain Kan Wei Huat (NTU #8) also commented, “This thing has been going on for many years. Every game we play, we always start off like this. This is like Dejavu all over again. For us, we just had to compose ourselves like we did in all our other games, just get our mindset correct, do our defense first, deal with the referees’ calls and just compose ourselves. The offense will flow once we do our defense properly. Another thing to add would be that our centers did a good job on the rebound today and they were fighting a lot down low to get the offensive put-back. So very good effort on that.”