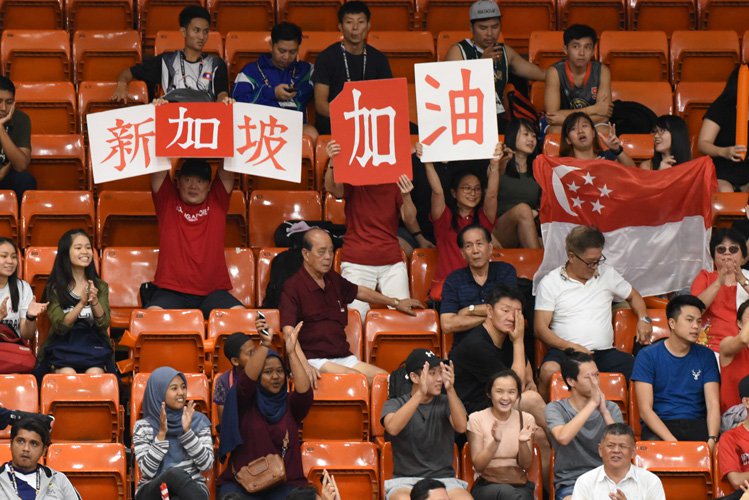 But for family members of Team Singapore’s basketball team, it is all part of the trials and travails of having to support their loved ones through thick and thin.

Clara Poon, sister of basketball player Cheryl Poon, said: “I’ve been watching her since she started playing basketball in the combined schools so it’s more of a follow through. I don’t think I’ve ever not been at any of her matches before.

“Even during my ‘O’ and ‘A’ levels, I wouldn’t even bring my books to the games to study because I was worried it would jinx the games. That’s how much I support her.”

Lim Phang Boon and Ann Lim, parents of cager Amanda Lim, have travelled as far as China to root for their daughter.

So along with Lynda Dyeo and husband Hiroshi Yoshida — the parents of Yukie Yoshida — the group did not think twice about making the five-hour journey to Kuala Lumpur to watch the basketball team in action, despite not having tickets for the final days of the tournament.

“As parents who support the Games, we weren’t even entitled to tickets to come here,” said Phang Boon. “We had to come here and ‘beg’!”

While it was free seating for the opening series of games at the MABA Stadium in Kuala Lumpur, there were no tickets on sale for the cagers’ final round robin game with Indonesia.

But the group then managed to find some tickets.

Lynda said: “It was a coincidence that there were these two uncles that were very enthusiastic fans. They happened to recognise and ask us if we had tickets. I said, “No, we don’t”.

“We had to purposely tell them that we were going home.”

What unites the group is a common love for basketball, said Lynda.

“We love basketball. we scream our throats out. After the game, we don’t say you did well or you didn’t do well. We’re so happy to have been able to watch the game. We just love the game,” she enthused.

For Ann and Phang Boon, supporting their daughter at the SEA Games has added significance, as Amanda had narrowly missed out on making the team in 2015.

“This is her first time playing in the SEA Games team so it’s more encouraging for her to have us here to support her,” said Phang Boon.

A former basketballer himself, he had initially discouraged his daughters from taking up the sport as he felt they lacked the height advantage.

“We encouraged her to do swimming and other sports, but somehow three of my daughters got into basketball,” he said. “She is the one who actually brought us back to basketball to meet up with my old friends.”

Amanda’s younger sister Amelie was also present to cheer her sibling on.

She said, “I don’t see my sister at home much because she trains a lot. she invested a lot of her time and effort — as has everybody in the team. To be able to see them pull on the jersey, you feel very proud of them.”

Lynda and Hiroshi have different reasons for supporting their daughter, one of which is to give back to the sport which has allowed their daughter to assimilate into Singapore.

27-year-old Yukie was born in Singapore but moved to her father’s hometown when she was less than a year old. She returned to Singapore when she was 19.

“Through sports, she got to know a lot of friends who really took care of her,” said Lynda. “She told us she likes Singapore because of basketball. Because she told us that, we are very supportive. We really appreciate them from the bottom of our hearts.”

Ultimately, the group agreed that rooting for their loved ones is about more than just the results.

“Sometimes Cheryl would apologise if the game wasn’t good but I tell her that it’s not really about the team performances but seeing her doing what she likes,” said Clara.

As for Cheryl, having her sister in the stands is added motivation.

“I just don’t want to let people down,” she said. “They came all the way, it is always on my mind when I play, that helps me.

“On the court, it helps me do what I do and that’s important. When the supporters come, I’m going to give them something to cheer about.”

For more coverage of the 29th SEA Games, go to https://www.myactivesg.com/team-singapore/read.