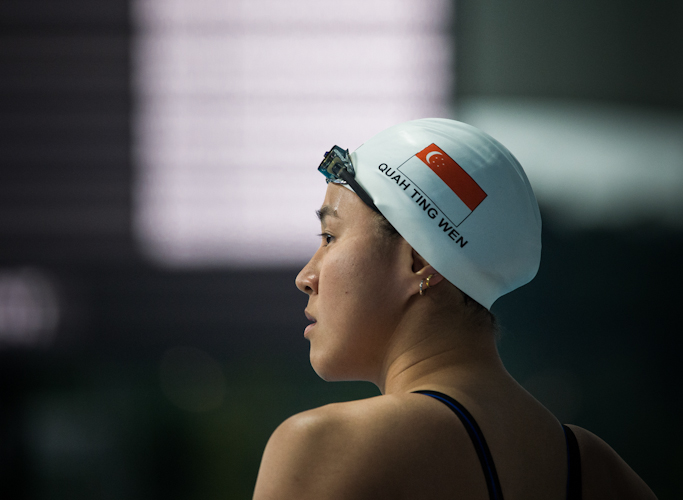 Quah Ting Wen clinched gold with a time of 26.83 seconds in the Women’s 50m butterfly event. Photo by: Shaun Ho/SportSG

Brother Zheng Wen was pushed all the way by Games debutant Francis Fong in the 200m backstroke as they made it a Singapore 1-2 after Olympic champion Joseph Schooling had gotten Singapore off to a roaring start on the third day of the swimming programme, claiming the 100m butterfly gold in a new SEA Games record 51.38 seconds.

“Today has been on my mind a lot, just because I’ve never actually done three races back to back before, but it helps to have people in the stands and the coaches on the side,” Ting Wen said at a poolside interview after the final race of the night. “I’ve had so many people telling me to take it one race at a time, I did that and it helped.”

Ting Wen was particularly emotional after she won her first race of the evening, when she held off Vietnamese Thi Anh Vien Nguyen by 0.02 second for gold in the 100m free. Ting’s 55.74s was a new SEA Games record, with the top three all finishing under 56s. Youngest sister Jing Wen finished fifth in a new personal best of 56.12s.

The only gold that eluded Singapore Wednesday was the men’s 200m freestyle that saw a titanic battle between Malaysia’s Welson Sim and Vietnam’s Quy Phuoc Hoang. Welson stopped the clock at 1:47.79 for gold and was barely able to move after that, while Singapore’s Danny Yeo got the bronze with 1:48.98 — a personal best and the first time he dipped below the psychological 1:49 barrier. Boys co-team captain Pang Sheng Jun came in fourth in a personal best 1:51.22.

Also clocking a personal best, Dylan Koo finished fourth behind Joseph Schooling in the 100m fly in 53.85s. He became only the third local to swim below 54 seconds in this event after Schooling (50.39s) and Zheng Wen (52.08s).

The biggest surprise of the night came in the 200m backstroke. Zheng Wen had to dig deep to out touch Francis by 0.4 second in a pulsating race. Zheng Wen’s 2:00.09 beat the Games record, while Francis shaved 3.15 seconds off his personal best with his 2:00.49. Francis still has the 100m back remaining in this meet.

“Wow, that really hurt,” Zheng Wen was overheard as saying after he got out of the pool after the race. “It’s a hard race. Francis was really pushing me all the way, but yeah, it’s pushing all the way for Singapore.”

Francis is 17 years old and a student at Anglo-Chinese School (Independent). He is one of 10 debutants in Singapore’s 27-strong swim squad. More than half are 16 or younger, with Methodist Girls’ School’s Gan Ching Hwee the youngest at 14. Nicholle Toh, another teenage debutant, finished fourth in the 50m fly with 27.86s.

With three days remaining on the swimming program, Singapore has now won 11 golds, two silvers and two bronzes in the pool and Chantal Liew’s bronze in women’s 10km open-water event.