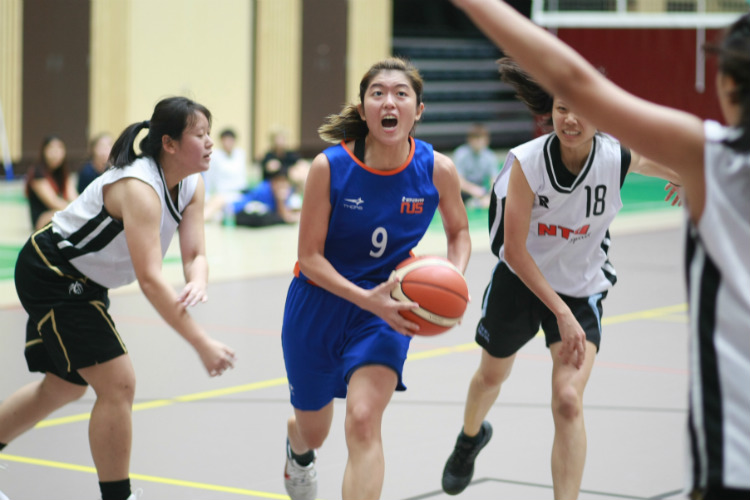 With this win, NUS have a 4-1 win-loss record and will advance to the final.

On the other hand, NTU got handed their first loss of the season and drop to a 4-1 record.

Edna Lim (NUS #9) converted the first basket of the game but Ong Sze Ming (NTU #2) quickly answered. NTU played good defense which led to offense as they quickly pulled ahead 9-4. Both sides traded baskets but it was NTU who came out on top after the first quarter, leading 14-9.

Unfazed, NUS came into the second quarter guns blazing. They went on a 12-0 run after a three-point shot from Edna Lim (NUS #9) and Bernice Yeo (NUS #4) respectively.

Lee Yu Zhen (NTU #31) drew a foul and made both free throws to end the scoring drought for NTU. However, Bernice (NUS #4) and Edna (NUS #9) got into a shooting streak as they both scored eight of their game-high 14 points in the quarter to outscore NTU 24-6. NUS led 33-20 at the half.

Knowing this was not their shooting night, NTU had to grind it out if they wanted to win. NTU fought hard for every ball defensively and slowly clawed their way back. Woon Wei Jing (NTU #12), who was tied for a game-high 14 points with Edna (NUS #9) and Bernice (NUS #4), scored six straight points for NTU to start the third. NTU continued to fight and were able to cut the NUS lead down to seven.

However, with time winding down, Edna (NUS #9) went coast to coast and made the pull-up jumper at the buzzer to bring their lead back up to nine.

NTU continued to fight. Louise Yip (NTU #79) drew a foul and made one of two free-throws. She got her own offensive rebound to set up Wei Jing (NTU #12) for the basket. This helped cut the lead NUS down to six.

NTU were on the verge of a comeback but Edna (NUS #9) decided to put a stop to that and drove all the way in for the basket with 1:20 left to play. Bernice (NUS #4) also got fouled thereafter and made one of two to increase their lead back up to nine.

With time winding down, NTU’s comeback efforts fell short as NUS went on to take the game 49-45.

Edna Lim (NUS #9) commented after the game, “I think at the start we were able to calm our nerves to play and then we were able to secure a few good rebounds and made a push for it. We made our defense work and there were some mistakes in the NTU defense so that really helped us get the lead at the start and we continued to push.”

Michelle Chew (NUS #21) added, “We tried to push the ball fast at the start so that we can play our offense at our pace. So we keot putting pressure on their defense and this gave us good offensive opportunities.”

Edna (NUS #9) also commended on the performance of the first-yesr players, “The first years played well throughout this competition and we were quite surprised at some of them as this is very promising for our own SUniG and future IVP knowing that we have good freshies joining us. They have a good balance between offense and defense and knowing defense win games, they will be a good fit for the team.”