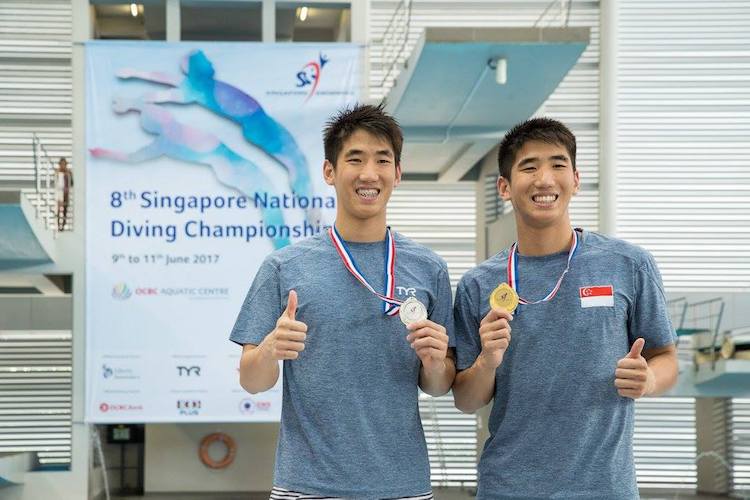 Mark and Timothy Lee posing for photos after another top finishes on the third day of the 8th Singapore National Diving Championships. (Photo 1 courtesy of Singapore Swimming Association)

Timothy and Mark Lee finishing first and second with scores of 383.05 and 367.00 respectively. These scores also qualify the twins for their third event at the World Championships this July.

Once again it was another fierce battle between the Lee brothers who dove identical routines. Their opening dive, an inward 2½ somersault, saw Mark take an early three-point lead over Timothy. Mark’s lead grew to 4.55 points after the second dive, a forward 3½ somersault.

However, Mark pulled up short on his third dive, a backwards 2½, which gave Timothy an opening to overtake Mark by 17.95 points.

The gap proved too much for Mark to close despite him scoring higher than his brother on the last dive. Mark had to settle for silver while the older twin, Timothy, claimed his third gold of the meet, along with a personal best score.

Despite missing out on gold, Mark said he still had good lessons from the competition that will help him for the SEA Games later this year.

“I’ve been training very hard for this competition, although there was one dive I didn’t do well in, but I think the the 5 dives were good,” commented Mark on today’s performance.

“There is stuff to take away from every competition and from this competition alone I’ve learnt a lot of things that I will be working on leading up to SEA Games this August.”

The twins, along with the rest of the national divers, are currently in Macau to compete at the Asian Diving Cup which will be their final meet before World Championships in July and SEA Games in August.