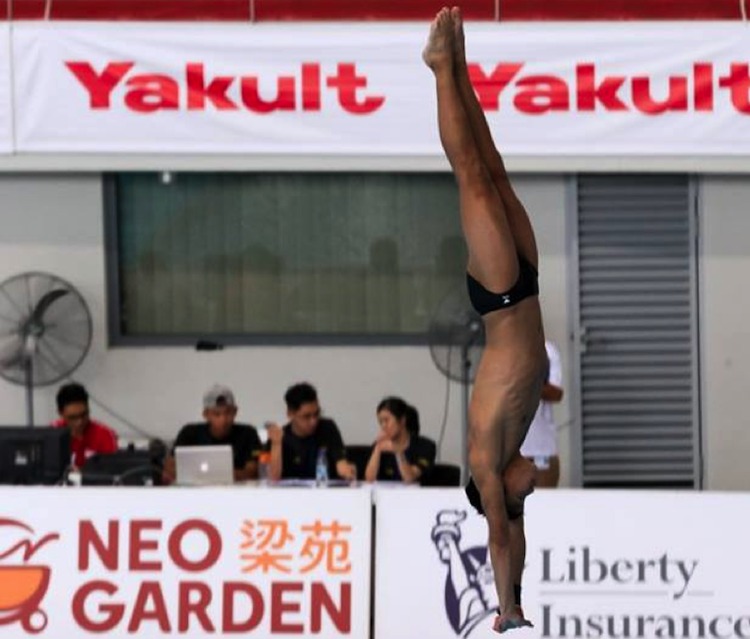 OCBC Aquatic Centre, Saturday, June 10, 2017 — Joshua James Chong showed his tenacity as he competed over three events on Day 2 of the 8th Singapore National Diving Championships winning two golds in the 3-metre Springboard and Synchronised 10-metre Platform, and another silver in the Men’s Open 10-metre Platform.

The 16-year-old clinched a gold medal in his first event of the day, the Age Group A Men’s 3-metre Springboard, with a score of 466.55.

He was in action again not long after in the Men’s Open Platform event, where he faced 20-year-old Jonathan Chan, who was looking to qualify for the World Championships this July in this event.

From the get go, Chan opened a 4.5-point lead over Chong. The gap continued to grow over the second dive, which saw Chan skillfully executing an inward 3½ somersault to score an 8.5 and an 8.0, thus increasing his lead over Chong to 14.1 points.

A veteran of the platform event, Chan’s finesse started to show over the last four dives as he consistently scored 8.0s and 8.5ss, eventually taking first place with a final score of 359.65, while also qualifying for the World Championships. Chong, who was fairly new to the 10-metre platform, finished with a respectable 286.20.

The two boys then teamed up in the afternoon session for the Men’s Open Platform Synchronised where they were the only competitors. Despite Chan and Chong being new partners in this event, their synchronisation scores were good. Their teamwork saw them hit high scores of 8.0s and 7.5s. They finished with a score of 341.58.

“I feel happy with my performance given that I only had last weekend and Friday morning to practice,” said Chan who is currently serving National Service.

When asked about having Chong as his new partner, an enthusiastic Chan answered: “I think it’s great. Joshua is one of the only people I can do synchro with and last time I didn’t have anyone to do synchro with me, so it’s very fun!”

Chan will be heading off to the World Championships in Budapest this coming July before heading to the SEA Games in Kuala Lumpur, while Chong will also be making his debut at the SEA Games this August.