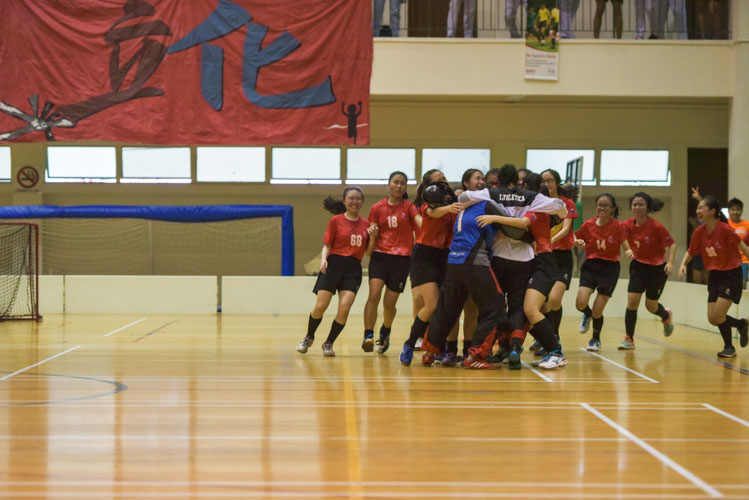 Delta Sports Hall, Wednesday, May 17, 2017 — Eliminated in the group stage last year, it would be fair to say River Valley High School (RVHS) were considered no-hopers in this year’s National A Division Floorball Championship.

However, the school defied all expectations and emerged as this year’s surprise winner when they beat Meridian Junior College (MJC) in the final 1-0 on penalties after it ended 1-1 in regular time to clinch their first title.

RVHS broke the deadlock early in the third period through Ong Sze Yi (RV #8). Only three minutes were left on the clock when captain and centre Emily Ong (MJ #88) equalized for MJC and forced a penalty shoot-out to crown the champion.

Forward See Yuanru (RV #17) came in clutch to tuck away RVHS’s third penalty past goalkeeper Chua Hui Xuan (MJ #07), while the other nine girls all missed or had their shots saved. Overcome with emotion, Yuanru (RV #17) said: “I really didn’t expect myself to be the one deciding this game.

“When I was on my penalty, the only thing in my mind was to score that one goal for the team early because it would’ve been a crucial moment and I’m glad I did it.

“I feel so happy to have scored that one goal and clinch the championship for my team. It was a very tough fight and we made a lot of mistakes. We kept fighting hard and in the end, we got what we deserved today.”

The two sides last met in Group Z where RVHS convincingly beat MJC 3-0 but this time, the final was a close affair. Almost nothing could separate either side in the first two periods in what proved to be a cagey battle.

Emily (MJ #88) ran the show for last year’s runners-up, using her tall frame well to outmuscle the opposition and dribble past them to distribute the ball to her two attackers. Corrine Poh (MJ #21) tormented the RVHS defenders, unleashing shots from all over the court and Emily (MJ #88) joined in as well. Soon enough, their teammates followed suit but opposition custodian Lim Zhi Yan saved everything that came her way.

Meanwhile, RVHS enjoyed more possession and that translated into shots on goal. They exchanged quick passes down the flanks, finding Ho Yoon Yee (RV #13) and Yuanru (RV #17) in space on various occasions. Unfortunately for RVHS, all their efforts to score were in vain as the match remained goalless heading into the third period.

Come the final period, RVHS and MJC turned up the tempo. Both sides were furiously attacking, sacrificing their defensive shape momentarily and that allowed RVHS to take the lead through Ong Sze Yi (RV #8) just inside three minutes.

For the next ten minutes, RVHS were defending resolutely to hold on to their slim lead. They were three minutes away from being crowned champions but Emily (MJ #88) popped up with a late equalizer to quash any early celebrations in the opposition camp.

Her drag shot from the halfway line eluded every RVHS body to find the back of the net. That prompted the entire MJC team – including the reserves – to invade the field of play and mob Emily (MJ #88) as they celebrated the late leveler.

As the tie finished 1-1, it went straight to penalties where only Yuanru (RV #17) was able to hold her nerve in the nail-biting shoot-out to score and make history for RVHS by winning them their first championship.

RVHS coach Stella Chia described the tense final in one word, saying: “Nerve-wracking. We pulled through today but it was really tough. Our girls were a little bit shaky at the end and the goal we conceded almost cost us.

“We were prepared to go all the way and we weren’t surprised when it came down to penalties. Thankfully, we made it through and I’m just glad that it’s over. Everybody worked so hard and the credit goes to the girls.”

Reeling from the painful defeat, a crestfallen Emily (MJC #88) said: “It was a good loss because we fought very hard and it only came down to penalties. When I scored the equalizer, the whole team was happy because we still had a chance to win the title and we weren’t ready to give up so easily.

“As a whole, the journey this season hasn’t been a smooth one but it was an enjoyable ride. We had each other’s company and we managed to come this far. We played our best in the final and gave it our all.”