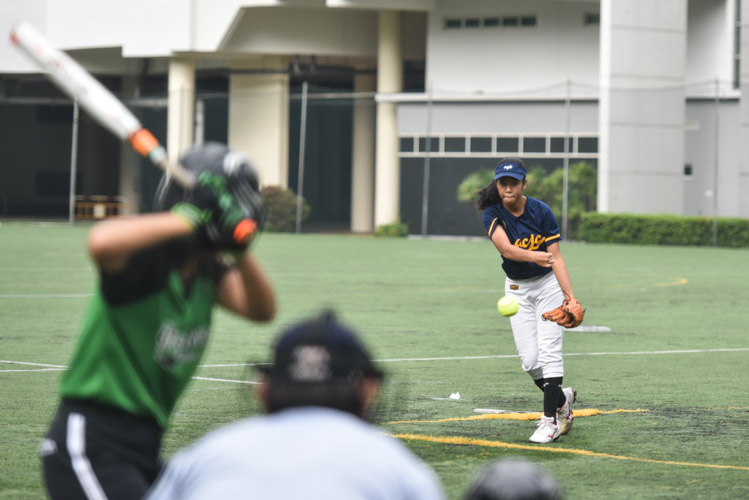 17-year-old Ng Jing Yi (ACJC #43) pitched a perfect game for the final, which had to be postponed twice due to inclement weather. Ng did not give away any walks or hits and also struck nine RI players out at bat, giving RI no chance to score against ACJC.

On her performance, the national youth team pitcher said: “I just went all out because it was the last game so I didn’t want to have any disappointments.”

“I was quite stressed because we faced them before, so there was an expectation to win them but I just did what I needed to do, just focusing on the process.”

RI came into the final as underdogs for the game after ACJC beat them 8-2 in the round-robin stage.

RI coach Farhan Harahap said: “We came in with no expectations and at the start of the game, we defended well and batted better than expected but we just couldn’t break their pitcher.”

“I told them even if we could hold them for another inning, we needed to hit to score and win the game,” he added.

ACJC, on the other hand, managed to advance bases in the first two innings but RI came back with a strong defense each time.

In the first inning, RI picked themselves up from a one down, bases-loaded situation to prevent ACJC from scoring any runs. ACJC was unable to bring home the runners on second and third base in the second inning as well, while the third inning saw RI pull off a three-up, three-down defense, tying the teams at 0-0.

However, the late gamechanger came in the fourth inning, when RI saw themselves caught in a bases-loaded situation again.

RI had it going for them with one-down and none on base, facing the bottom of the ACJC batting order. However, RI pitcher Shanice Lim (RI #24) gave a walk to ACJC’s Sherilyn Heng (ACJC #7), loading first base, bringing Megan Heng (ACJC #17) up to bat.

The eighth batter in the ACJC lineup then started the ball rolling for the team, hitting a single to the pitcher who failed to throw the lead runner out. Last batter of the lineup, Shino Lim (ACJC #21) also managed to hit a solid single to the RI second baseman Nicole Liew (RI #12), who fumbled with the grounder ball, advancing the runners.

With all bases loaded and ACJC now at the top of their batting order, ACJC’s captain, Amanda Yeo (ACJC #26), worked the lineup to their favour with a hit to the first baseman Teoh Ning (RI #12) of RI. She then overthrew to catcher Anna Alyssa Bte Mohammad Fadil (RI #6) at home who failed to stop the ball, committing a costly error which allowed two runs to come in.

Still one-down with adrenaline running high, second batter Faith Gan (ACJC #33) hit a home run, sending herself and the two runners before her home, securing three more runs for the team. RI managed to regain momentum to hold ACJC down after that, ending the inning with a five run lead to ACJC.

At their final inning to bat, RI seemed better able to judge Ng’s ball, as the three RI batters who went up to bat managed to successfully contact her balls. But ACJC fielded and defended tight, bringing the game to a close with a three-up, three-down defense.

Teary-eyed about their performance, RI captain Nicole Liew (RI #12) said: “I’m a bit disappointed because I know that we have the potential, but we just take quite a long time to warm up. We trained really hard, and they trained hard too, but in the end they could perform and we couldn’t, so credits to them.”

This championship win is the third for the school, which started the CCA seven years ago under the guidance of head coach Elaine Chua.

“Teamwork was the key (to winning). Everyone expected the better player to play well, but even the unexpected players performed up to standards, which was very good,” said Chua.

“I think they fought hard, they really played hard, they trained hard and they deserved to win.”