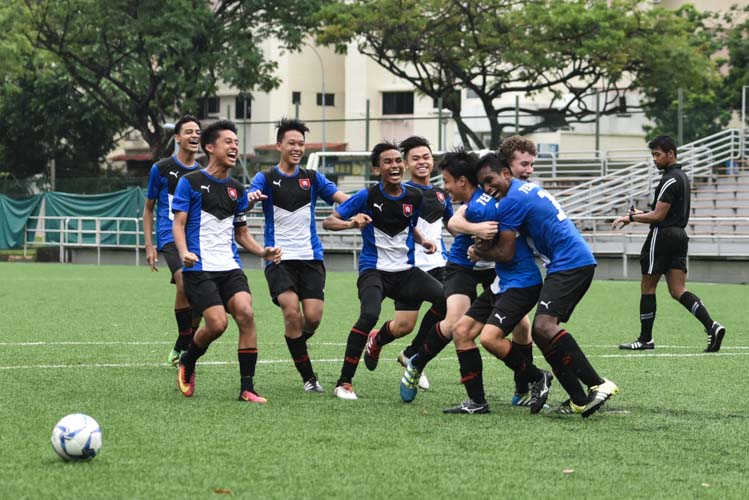 Jurong East Stadium, Monday, May 15, 2017 — In another close encounter between Nanyang Junior College (NYJC) and Anglo-Chinese Junior College (ACJC) in the National A Division Football Championship third and fourth placing match, NYJC held their nerves to beat ACJC 5-4 on penalties after regular time and extra time saw no goals.

The two sides previously met in a Round 2 group game and ACJC required an injury-time winner to beat NYJC 1-0 then.

The shoot-out saw each side’s first four spot-kick takers successfully tuck away their penalties and it came down to the final penalty to decide who walked away with the bronze. Oon Jin Kuan (ACJC #8) stepped up for ACJC, hoping to give his school an important lead. Unfortunately for him, Jin Kuan’s (ACJC #8) attempt veered off-target and that meant NYJC could seal victory by scoring their last penalty.

Standing firm before the ball, Julian Tan (NYJC #11) could sense the tension around him and could not help but feel slightly nervous.

Julian (NYJC #11) said: “I felt like the responsibility was on me to cap off a great team performance. When it was my turn, I knew I had to do my job. Before walking up, I wasn’t really nervous but as I stepped up, I knew the tension was high.”

The right-back, however, overcame any stage fright to fire his shot past John Ng (ACJC #1) and win the shoot-out for Nanyang.

“I put all my focus into hitting the ball and when it went in, I couldn’t feel anything. I just felt like we got what we deserved today and I’m proud of the team.”

Nanyang coach and ex-national footballer Tan Sio Beng said: “Before the game, I told the boys that it’s important to not leave anything behind because throughout the season they’ve been doing well and giving the best until the final whistle.

“We didn’t do so well in the first half and after a good word with them during halftime, they responded and showed their character. Credit to them for keeping their composure during the penalty shoot-out and to win it from there.”

Although the match was a goalless affair, it still saw plenty of action. On the back foot, NYJC were unable to contain the ACJC attack. With Kok Safacan (ACJC #7) thumping long balls from the backline, Andre Shum (ACJC #2) and Keefe Soon (ACJC #17) timed their runs perfectly to catch out the Nanyang defence on several occasions.

In open space, the duo unleashed shot after shot from range but goalkeeper Hernandes Lim (NYJC #15) caught everything that came his way. Captain Chia Chong Jin (ACJC #10) did well to control proceedings throughout the tie, playing pass master to pick out his teammates with pinpoint accuracy.

Meanwhile, NYJC relied on the flanks to penetrate the opposition defence. Haziq Shah (NYJC #24) was a constant menace down the right, swinging dangerous crosses in for captain and striker Christian Hugh Rodrigues (NYJC #3) but the latter could not connect. NYJC were unable to create clear-cut chances on the day, no thanks to the rock solid defensive pairing of Justinian Matthew MacPherson (ACJC #5) and Ryan (ACJC #9).

Two minutes into the second half, ACJC spurned an opportunity to go one goal up. Keefe Soon (ACJC #17) sprinted down the line and cut back to Andre (ACJC #2) but the latter’s shot was saved at point-blank range by Hernandes (NYJC #15).

In the 66th minute, NYJC also wasted their best chance to take the lead. Collecting a pass from Lee Banbury (NYJC #12), Christian (NYJC #3) struck a low driven shot to John’s (ACJC #1) left but it could only shave the far post to go out of play.

Five minutes from time, ACJC were unlucky not to score again. After a scramble ensued from an ACJC corner, the ball fell to Chong Jin (ACJC #10) inside the box and the central midfielder hit a first-time volley. However, his acrobatic attempt ricocheted off the cross bar – much to the ACJC crowd’s chagrin.

Extra time kicked off and a light drizzle also descended on the field. The two halves of 10 minutes had chances few and far between, and the match slowed down. Having played a semi-final just two days prior, players from both schools were fatigued but they kept pushing forward to break the deadlock.

The goals proved elusive and after 100 minutes of play, only penalties could separate the two sides – a lottery that NYJC took advantage of to come out 5-4 victors.

ACJC’s captain Chia Chong Jin (ACJC #10) vowed to come back stronger saying that they were unlucky to lose in the shootout.

“I think both teams played really well. We’re both on the same level. We played down the line because their weak links were their fullbacks. We managed to outplay them a few times but we couldn’t finish in the attacking third,” Chia said.

“It was just really unlucky to lose on penalties but we accept this defeat and we’ll come back stronger next year. This tournament has been a fun journey. We pushed through together as a team and I’m really proud of them.”