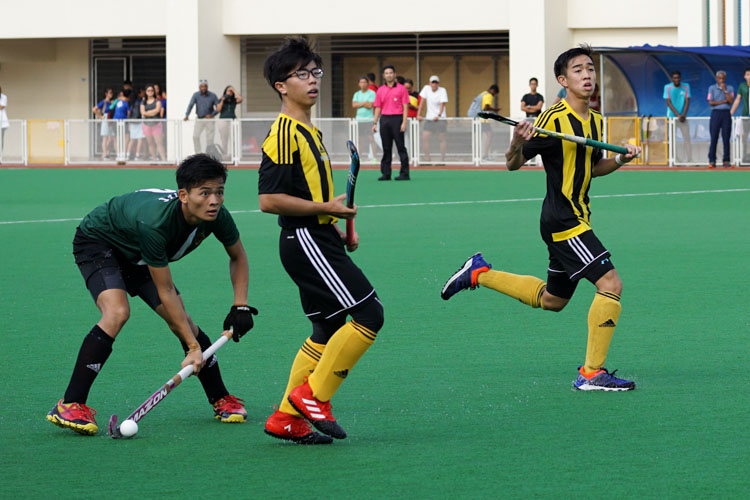 RI and VJC boys looking towards the referee as he blows the whistle. (Photo 1 © Benedict Yeo/Red Sports)

Sengkang Hockey Pitch 1, Thursday, May 11, 2017 — A moment of magic from Ramalingam Gouthaman (RI #14) was all that Raffles Institution (RI) required to dethrone defending champions Victoria Junior College (VJC), beating them 1-0 in the National A Division Hockey Championship final for their seventh title in 10 years.

Said the right winger: “The only thing going through my mind was to keep jinking. I’ve always had a problem with dribbling because I never looked up to see the opponents’ sticks.”

“My seniors were good at it and always taught me how to dribble properly. As I made the run, I didn’t realise the time or the number of defenders around me. I could only focus on what my seniors said and just kept jinking.”

“I feel very happy (to have scored the goal) but I dedicate this goal to everyone in my team. Throughout the season, everyone has helped me a lot. Whenever I make mistakes or play bad games, they never once gave up on me. It’s everyone’s belief and fighting spirit that created the goal.”

Coming into the final, both teams were unbeaten throughout the season while RI were yet to concede a single goal. Unlike last year’s high-scoring final which saw VJC beat RI 3-2, this year’s affair was a cagey one.

Despite scoring a whopping total of 49 goals this season, both RI and VJC struggled to attack. After a goalless first half, the teams became more adventurous in front of goal but lacked the killer instinct. No one registered a shot on target until Gouthaman’s winner.

Akash Prebhash Chandra (RI #10) was a vital figure for the Rafflesians. The livewire played an instrumental part in dictating play and made various clever runs to find space. Akash (RI #10) also found himself regularly laying off passes to Jirafe Aditya Vijay (RI #7) and Puttur Thejas (RI #21) but the duo were wasteful in front of goal.

Meanwhile, Ashwin Kalaichelvan (VJC #19) pulled the strings for Victoria. Operating as a forward, the lanky figure did well to track back and win possession. Ashwin (VJC #19) was also able to run behind the Raffles defence on several occasions, pouncing on misplaced passes to unsuccessfully shoot on goal.

All the players on the field became increasingly frustrated as the clock ticked. Fatigue began to set in, affecting VJC more as they saw a few players succumb to cramps in the closing stages. Compared to the first half where both teams were fighting for every ball tenaciously and made crunching tackles to regain possession at any cost, the last 15 minutes became an endurance test as the match slowed down in tempo.

Just as when the players were mentally preparing themselves for extra time in the dying embers of the game, Gouthaman (RI #14) found an extra burst of energy in him. Taking advantage of a worn-out VJC defence, the 17-year-old skillfully weaved in and out to score the last-gasp winner. After that extraordinary effort, the match had only seconds remaining and it was all but certain that RI were going home with the winner’s trophy.

RI coach Mohamad Ali said: “The game was so locked, it definitely needed a special moment to decide who won. It was a good change of pace by Gouthaman (RI #14) and what he did was just spectacular.”

“During halftime, I was telling Akash (RI #10) that he should be dribbling more and taking on the shot. I guess Gouthaman (RI #14) must have been nearby because he got the message and was able to score.”

“Our fitness was a factor in our loss because you could see our main players were down in the last quarter and had to sit out. RI kept pushing and pushing to find the winner. It looked like a goal was coming and that’s what happened right at the end because the players were too tired to keep up.”