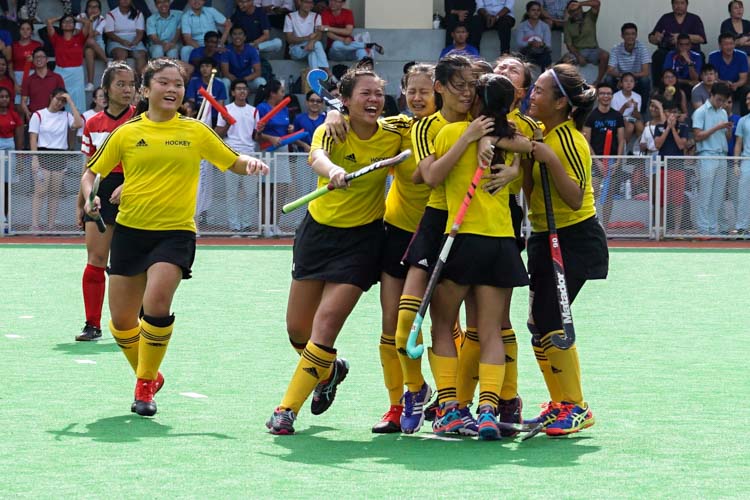 The girls from VJC celebrating their goal against MI, with some of them in tears. (Photo 1 © Benedict Yeo/Red Sports)

Sengkang Hockey Pitch 1, Thursday, May 11, 2017 — They left it late but Victoria Junior College (VJC) secured their 15th straight National A Division Hockey Championship when they beat Millennia Institute (MI) 1-0 after extra time in the final, thanks to Klara Chong’s (VJC #27) last-minute winner.

On the last play, VJC threw bodies forward in search of the title-winning goal and Klara (VJC #27) duly delivered. After chaos ensued in front of goal, the ball fell to Klara outside the semi-circle. Almost out of instinct, the central midfielder hit a long-range stunner past the MI defense to find the top corner.

As soon as the ball went in, scenes of jubilation followed immediately as Klara’s (VJC #27) teammates piled on top of her – even the reserves ran onto the field to join in the celebration. Meanwhile, a devastated MI did well to hold their composure and huddled up to comfort one another.

On her title-winning goal, 17-year-old Klara (VJC #27) said: “The match was so stressful and I was very panicky. When the ball came to me, I was just desperate to take a shot on goal and luckily it went in.”

“We wanted to play our hardest because we’ve been champions for so long and we wanted to keep that tradition alive. MI were much better than we thought and we underestimated them from the preliminary round (VJC beat MI 4-0 then). They were so much faster and so much more aggressive.”

Klara’s (VJC #27) coach Nordin Manaff also felt the team were too relaxed against MI, saying: “They were complacent and didn’t follow the game plan. The girls were supposed to create space because a weaker side like MI will pack players in. If they aren’t able to open up the game, they’ll be in trouble and that’s what happened.”

“It was a bit of luck that we won but looking at the season as a whole, the girls deserve it and are the best team. It’s just that they didn’t play well today. Maybe it’s because of the pressure to keep the title-winning streak alive and even if they won’t want to admit it, it might have got to them.”

The nerves certainly showed throughout the match for VJC. Despite creating many chances on goal, the Victorians saw their efforts defended well by a compact MI defense. Many times, Quinn Cheong (VJC #8) and Tammy Toh (VJC #9) combined in attack to throw off the MI defenders but found themselves quickly shut out.

The first half was largely a one-sided affair as VJC were more alert to every ball and dominated possession, leaving MI to park the bus. The second half was a similar story but the Victorians grew increasingly frustrated when they kept wasting their chances.

This gave Millennia time to shift their focus and they started their own attacks when the rare opportunities presented. Diyana Khairunnisa (MI #19) was a pivotal figure in midfield, catching loose balls and playing it through to forward Lim Zi Xuan (MI #5). The latter broke through the VJC backline a few times but Hilary Lau (VJC #10) proved to be a rock in defence, breaking up the opposition attack before it gained momentum. That forced VJC to adopt a more defensive approach.

No side was able to break through in regular time and in extra time, MI began to press the defending champions more. This time, it was VJC who threw bodies behind the ball to block every MI shot. Victoria still attacked when they could but it was clear MI were holding out for the penalty shoot-out.

After 70 minutes of play, players from both teams were on their last legs but VJC found enough energy to launch one last attack right at the death. A barrage of bodies crowded the MI goalmouth and Klara (VJC #27), far out on her own, had enough space to hit home the winner with the match’s last hit.

A bittersweet defeat for MI, their teary-eyed players wore smiles on their faces knowing they did their best and exceeded all expectations by reaching the final. MI captain Nur’ Aqilah (MI #11) said: “This season is quite a memorable season for us.”

“We’ve no experienced players and we started from scratch, compared to the other teams who’ve an advantage compared to us. To come this far with our team is a fairytale for us. I’m really proud of my team and I’ve not much regrets over the loss because I know my team fought really hard.”