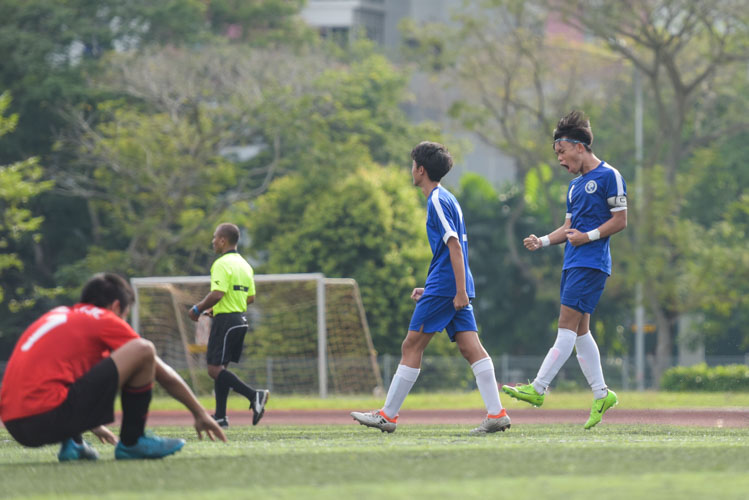 MJC Captain, Justin Hui (#4), celebrating after the final whistle was blown, cementing their 2-1 win over NYJC. MJC are now through to the final against VJC. (Photo 1 © Cheah Wenqi/Red Sports)

Innova Junior College, Friday, May 12, 2017 — Defending champions Meridian Junior College (MJC) almost saw themselves slip up against a resurgent Nanyang Junior College (NYJC) in the National A Division Football Championship semi-final but were able to scrape through to the final with a 2-1 victory.

Ten minutes into the match, MJC were already holding a comfortable two-goal lead. Nathanael Chin’s (MJ #9) corner unexpectedly swung into the net in the third minute and captain Justin Hui (MJ #4) tucked away a penalty in the 10th minute to make it 2-0.

After that, MJC switched off. Complacency began to set in and Meridian struggled to dictate the game. Set-pieces were the only means for them to threaten the Nanyang goal as opportunities during open play proved elusive.

Justin (MJ #4) and Bhavin Assandas (MJ #7) shone for their side. The duo did their best to open up the rock-solid NY defence, showing quickness and aggression to fizz past the defenders. Unfortunately for them, their final touch let them down and they were shut out by Ahmad Mirza (NY #2) and company.

Despite the early deficit, the Nanyang players remained resilient. NYJC were rampant in attack, playing long balls into the penalty box for captain and striker Christian Hugh Rodrigues (NY #3) to latch onto.

That strategy paid off in the 56th minute when Jordan Ng (MJ #11) failed to control a ball coming in over the top and it fell to an unmarked Christian (NY #3) who found the net via a half-volley inside the area.

Christian’s (NY #3) goal was crucial in invigorating NYJC and the boys in red were fired up to find an equaliser. Nanyang pushed their players up, bombarding down the flanks and spraying deadly passes inside the danger areas. They forced opposing custodian Pho Jia Yuan (MJ #25) into making a couple of top-drawer saves, including a point-blank header from Christian (NY #3) in the 66th minute – arguably Nanyang’s best chance to equalise.

Containing NYJC proved to be a difficult task for MJC. The latter shifted their formation late on, playing with just one striker in Royston Tan (MJ #10) while introducing defensive-minded substitutions to hold on to their slim one-goal advantage.

The last few minutes became a test of nerves. MJC’s only intent was to defend for their lives and hold up play. They even saw two of their players (Jordan (MJ #11) and Defido (MJ #22)) earn yellow cards for time-wasting. Meanwhile, Nanyang launched one attack after another to draw level but could not finish off their efforts as they narrowly lost 1-2.

Justin Hui (MJ #4) felt his side was too relaxed after going 2-0 up, saying: “We were quite lucky to win 2-1 today. Some of the players’ mindsets weren’t correct. They thought a 2-0 lead was good enough and expected a comfortable, easy game.”

“Going into halftime 2-0 up, it was never enough to secure an A Division semi-final. It’s a very dangerous scoreline. The opponent can score one goal and the pressure is on you. This was one of those games where we had to grind it out and work hard. In the second half, we really dug in deep and defended well.”

Meanwhile, opposition number Christian (NY #3) said: “We started off badly because we were nervous. After going two goals down, we slowly found ourselves and got our confidence back. The second half, we came out stronger because we really wanted to make it to the final.”

“Once we started attacking, you could see Meridian putting on a lot of defenders. We played direct and focused on putting the ball into the net. We always knew the momentum would shift once we got that first goal. I told everyone to believe in themselves after I scored and motivated them to fight on. Even though we still lost, we can be proud of what we did out there.”

The final sees MJC take on Victoria Junior College, who beat Anglo-Chinese Junior College (ACJC) 1-0 after extra time in the other semi-final, on May 23 at Jalan Besar Stadium. NYJC will play ACJC in the 3rd/4th placing match on May 15 at Jurong East Stadium.