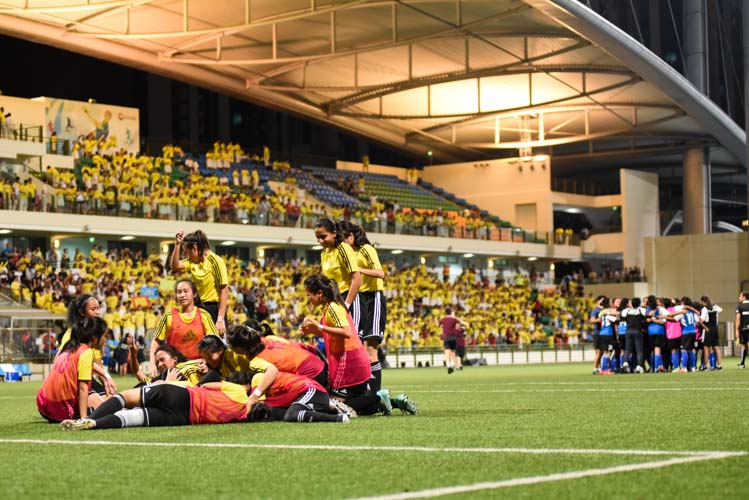 Jalan Besar Stadium, Tuesday, May 9, 2017 — As the penalty shoot-out loomed, Victoria Junior College (VJC) goalkeeper Hannah Lim (VJC #1) thought she had done all she could against Meridian Junior College (MJC) in the National A Division Football Championship final.

After regulation and extra time, the game was tied 1-1. By right, she was to play no part in the spot-kicks as her teammate and central defender Insyirah Maritz (VJC #25) – a natural goalkeeper who was more adept at saving penalties – was set to take her place between the sticks. After captain Chelsea Eng (VJC #6) tucked away Victoria’s first penalty, makeshift custodian Insyirah (VJC #25) was ready for MJC’s first penalty taker Zaiheeda Zaini (MJC #10).

However, disaster struck. Moments before Zaiheeda (MJC #10) made her run-up, Insyirah (VJC #25) collapsed and clutched her legs in agony. After 100 minutes of play, her body gave up on her and Insyirah (VJC #25) was unable to play shot-stopper. This meant Hannah (VJC #1) had to step up and resume her goalkeeping duties in the shoot-out – a task that had her panicking.

The 17-year-old said: “I wasn’t expecting the match to go down to penalties but as extra time went on, I saw it coming but I didn’t realise I would have to be the one to step in goal. The whole idea was for (Insyirah (VJC #25)) to save the penalties and I thought my part in the match was over.

“But she suffered leg cramps and was unable to stand up, and it was up to me to save the penalties. I panicked a bit because everything happened so suddenly and I was in this situation now. It was definitely nerve-wracking but all I could do was just focus on the ball.”

Although Zaiheeda (MJC #10) got the better of Hannah (VJC #1), the latter rallied herself to make two consecutive saves after teammate Ng Hui Ling’s (VJC #5) conversion to maintain Victoria’s 2-1 lead. Both Cassandra Michel (VJC #12) and Nuryn Aqidah (MJC #6) both slotted home to make it 3-2.

Final shot taker Rachel Monteiro (VJC #9) could have sealed the title for her school but saw her effort saved by opposing custodian Christine Lim (MJC #1) and it was up to Hannah (VJC #1) to clinch VJC’s fifth straight championship by denying Alicia Ng (MJC #7).

With almost 1,000 supporters from both schools on the edge of their seats, Hannah (VJC #1) stood her ground and correctly read Alicia’s (MJC #7) ball down the middle to palm it away. After what proved to be the title-winning save, Hannah (VJC #1) fell to the ground and teared in celebration while her teammates ran towards her in joy.

Hannah, who only picked up football last year, said: “It feels great to win the title. We didn’t expect to win it this time around because we’ve had a lot of injuries and we felt uncertain. Before the championship, our teacher-in-charge showed the team a video and there was a quote saying we’ve to crawl through inch by inch.

“That’s how we really did it – bit by bit, everyone gave enough effort to push through and I’m very proud of everyone for having come so far despite the obstacles.”

After a goalless first half, VJC took the lead five minutes into the restart through Tiffany Low (VJC #17). Pressing the backline, the forward latched onto a through ball from midfield and rushed forward to drive a grounder past Christine (MJC #1) to make it 1-0.

VJC were dominating large parts of the match, thanks to their high pressing and slow build-up play. Meridian, who previously lost 2-0 to the same opposition in the group stage, learnt from that defeat and defended well for the most part. However, MJC could not break down the defending champion’s shape and go on the offensive.

Just when it seemed like Tiffany’s (VJC #17) goal would be enough to secure the win, the competition’s top goal scorer Zaiheeda (MJC #10) threw a spanner in the works. In the final minute of regular time, VJC conceded their first goal this year when Zaiheeda (MJC #10) struck a sweet free-kick over the wall that sailed over Hannah (VJC #1). The striker’s ninth goal of the season brought the game back into contention and forced extra time.

The two halves of 10 minutes painted a different story. The last-minute equaliser ignited a new-found fire under MJC and they flourished in attack. They continued to pile on the pressure in the VJC penalty box and the Victorians played safely, preferring to play behind the ball. Both sides endured extra time but only one could come out the victor in the penalty shoot-out.

VJC coach Lawrence Lee said: “MJC came back very strongly and honestly, it was anybody’s game. I thought whoever scored the first goal would win but I was wrong, so credit to them. Towards the end, MJC wanted it more but we held on until the shoot-out.

“In that situation, both sides stand a 50/50 chance of winning and fortunately we won. The girls played well today and were fantastic throughout the season. They fully deserve the title.”

Despite the loss, MJC coach Noor Hafiz was still proud of his girls. He said: “They gave their all and played their best. They followed my tactics correctly but when it comes to a penalty shoot-out, it’s like a lottery. Congratulations to VJC but I’m quite happy with how my girls performed today.”