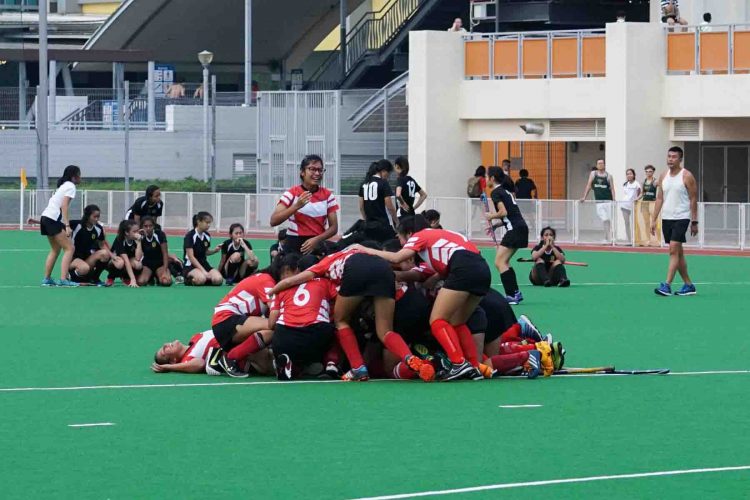 MI celebrating their victory over RI after a 2-1 win in the penalty shootout. (Photo 1 © Benedict Yeo/Red Sports)

Sengkang Hockey Pitch 1, Wednesday, May 3, 2017 — Millennia Institute (MI) pulled off an upset against the undefeated Raffles Institution (RI) in the semi-final of the National A Division Girls’ Hockey Championship, forcing RI to concede their first goal of the season before sealing the victory on penalties.

The odds were very much stacked against them but MI pulled off a miracle when they triumphed over RI 2-1 on penalties to make it to the final. Regulation time could not separate the two sides as it ended 1-1 and extra time made no difference to the scoreline.

Holding back her tears of joy, MI captain Nur’ Aqilah (#11) struggled to find the right words to talk about her side’s unexpected victory. She said: “Honestly, my mind is a blank right now. The reality of making it to the final hasn’t settled in yet for me.

“Our initial target was to make the top four because we came in 5th last year. When we met our target this year, we all thought this is the furthest we would go. However, we exceeded all expectations today and I’m really so proud of my team.”

As the match went on longer and longer, Aqilah was dreading the prospect of entering the penalty shoot-out – a situation she has never been in before. “When the match kept going on, I almost gave up because I was so scared of the shoot-out. When I stepped up to take my penalty, I could think of nothing else but only if I could score or not because I could feel the pressure on me.”

Score she did when Aqilah stepped up as MI’s first penalty taker. The 18-year-old right half dribbled past the helpless RI custodian and drove a low shot to give MI an early 1-0 lead after Eileen Ang (RI #10) missed her team’s first penalty.

RI drew level through Sheryl Koh’s (RI #6) penalty but it came down to sudden death to decide the victor. Both schools were relying on their sole penalty scorers so far to give them the lead but Aqilah (MI #11) could not place her shot this time and it was the same story for Sheryl (RI #6).

Meredith Tong (MI #12) finally scored after her earlier miss and it was down to Kwan Hui Xuan (RI #2) to keep Raffles in the tie. However, the latter was unsuccessful and that was the cue for the girls in red to celebrate their hard-fought win.

MI coach Nordin Manaff commented: “Our girls came in as the underdogs and they knew that they had to work harder. Our early goal helped them to settle down and gave them some confidence. But in the second half, our girls faltered because they made a lot of mistakes and RI equalised.

“We wanted to really win the game and played an attacking formation. We wanted to hit RI on the flanks and we did on many occasions but we didn’t finish our chances. Today’s victory is like a fairytale to the girls who could never imagine being in the final before and they should remember this game because they were outstanding today.”

In regulation time, both sides were evenly matched but chances to attack were few and far between. The battle for possession was mostly in midfield as the two schools pressured each other to lose the ball. Surprisingly, MI drew first blood when Lim Zi Xuan (MI #5) took advantage of the chaos in front of goal and tapped in from close range to put her side a goal up inside eight minutes.

RI had no answer and struggled to carve out opportunities on goal due to a resolute MI defence. They would only equalise ten minutes into the second half through Sheryl (RI #6) who lofted an astonishing shot over the MI backline to net and brought the tie to extra time.

Five minutes of extra time on either side proved too short for any team to make a difference and in the end, the match needed a penalty shoot-out as MI went away with the unlikely victory.

RI coach Dahlia Borhan said: “In the first half, we weren’t settled down yet because we weren’t sure of our opponent’s strengths. They scored an early goal and we were trying to come back throughout. We were trying to find the goals but unfortunately when it comes to penalties and sudden death, it’s anybody’s game. Hard luck that it wasn’t our day today and it’s MI’s.”

MI will take on defending champions Victoria Junior College – the latter beat Anglo-Chinese Junior College 1-0 in the other semi-final – in the final on May 11 at the Sengkang Hockey Pitch and will vie for their first title since 2002 – back when they were known as Jurong Institute.