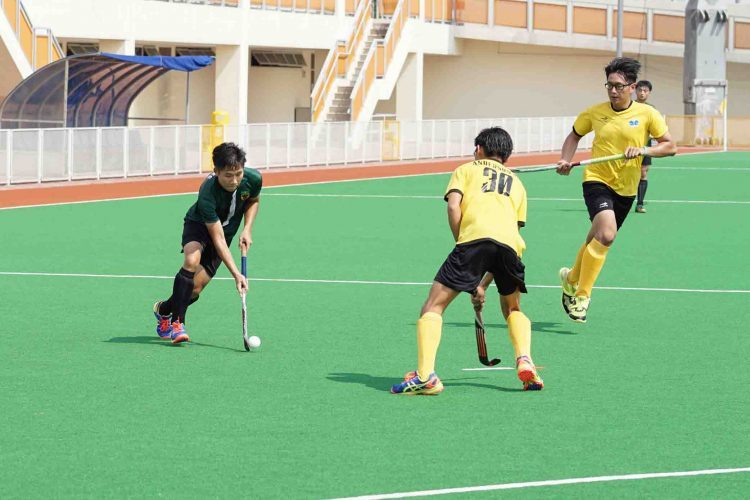 Sengkang Hockey Pitch 1, Wednesday, May 3, 2017 — Hockey giants Raffles Institution (RI) kept up their streak of appearing in every final this century as they dispatched Anderson Junior College (AJC) 3-0 in the National A Division Boys’ Hockey Championship semi-final and progressed to their 18th straight final since 2000.

Two first-half goals from captain Abdurrahim Hanif (RI #4) and Jirafe Aditya Vijay (RI #7) kept AJC at bay before Marcus Ooi’s (RI #3) second-half shot killed the game against an Anderson side that struggled to threaten throughout the 60 minutes.

Coming into the tie, Raffles remained undefeated in this year’s tournament and have yet to concede a goal. Despite their dominant display against Anderson, RI coach Mohamad Ali still felt his troops could have done better. He said: “After we scored the first two goals, our intensity dropped a bit and we’ve to work on that.

“We had many chances come our way but we need to be more clinical with our finishing and take our opportunities well. We also need to work on our pressing because that wasn’t very good today. The boys failed to work together and left a lot of space in the back. We’ve to be very careful of that because teams can catch us out on the counter-attack and score.”

Right from the get-go, RI was constantly pushing into the opposition half and it only took seven minutes for them to get on the scoresheet. Against the run of play, Abdurrahim (RI #4) capitalised on a misplaced pass at the back to run across goal and slot home to make it 1-0. The Rafflesians’ second goal came not long after when Jirafe (RI #7) tapped the ball into the net after a goalmouth scramble.

AJC were outmatched and outplayed at every turn. They were forced to start their attack from the back, relying on captain Lee Wei Qi to thread passes down the right flank in hopes of pulling one back. However, RI was able to keep Anderson in their own half for large parts of the game and the only time the latter had a sniff at goal were during short corners.

However, AJC looked a more organised side in the second half. They were able to branch out in attack and found space in RI’s defence to exploit. Anderson also made use of their rolling substitutions regularly, ensuring fresh legs were on the field at all times. Despite a new-found focus, AJC were unable to find a breakthrough.

As AJC ventured out to attack, they sacrificed their defensive shape and that cost them dearly. In the 43rd minute, Marcus (RI #4) split apart the opposition defence with his mazy dribbling down the left before playing a quick one-two pass with Akash Prebhash Chandra (RI #10). It was then all too easy for Marcus (RI #4) to simply place his shot and kill the tie off.

After the match, AJC coach Paramjit Singh said: “RI was always going to be a very big hurdle for us. I told my boys to be disciplined in marking and focus on defending but they lost concentration at times. At the same time, I didn’t want the boys to just sit back and defend all the time.

“When a chance comes, we’ll attack also. That was our plan to sit back, absorb and break on the counter but the chances were missing for us. The first two goals we let in were very soft and because of silly mistakes. The pressure got to the boys and I could see they were a bit nervous.”

RI will take on Victoria Junior College (VJC) in the final on May 11 at the Sengkang Hockey Pitch. VJC beat St Andrew’s Junior College 2-0 in the other semi-final. Speaking about the upcoming final, RI captain Abdurrahim said: “Today’s match serves as a good practice for what’s to come up against VJC.

“We are feeling good. We played well throughout the season and we’re glad we’ve been able to keep clean sheets all the way and it gives us good momentum going into the final. From today’s match, we still have things to work on and we hope to bring our best to the final next week.”