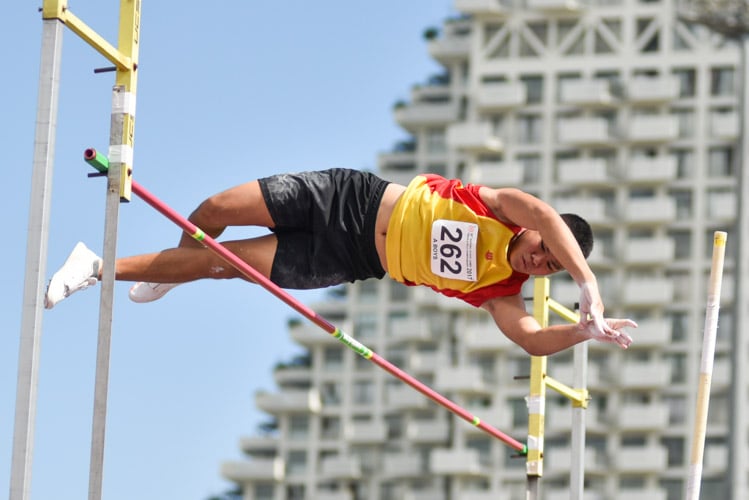 Bishan Stadium, Friday, 21 April 2017 — For a moment, things looked quite bleak for Hwa Chong Institution’s Ethan Cheong. Partly due to a poor choice of poles, he failed at the first two attempts at his opening height. It was not the way he wanted to round off his six-year journey as a schoolboy pole vaulter.

His anxiety was quite palpable, perhaps inflamed by the disqualification of three of the eight who started the competition under the blazing Friday afternoon sun. A switch to a lighter pole helped him eventually sail over 3.60 metres at his third attempt, but the greater focus carried Ethan through the rest of the competition as he went on to clear 4.10 metres.

“It’s a huge relief, because of the mishap at the start,” said Ethan. While before, he alternated between talking to himself and short yelps in between jumps, Ethan relaxed his shoulders and his beaming smile returned after he found himself the last man standing in the competition.

It didn’t even matter he failed to clear 4.21 metres after that. He started to enjoy the occasion a little more, turning around to even acknowledge his cheering schoolmates in the stands.

After all, he’s just won the gold at the National Schools Track and Field Championships for the first time in all the years he has competed for Victoria School and Hwa Chong Institution. This year’s gold adds to the silver he won in secondary two and the bronze at secondary four.