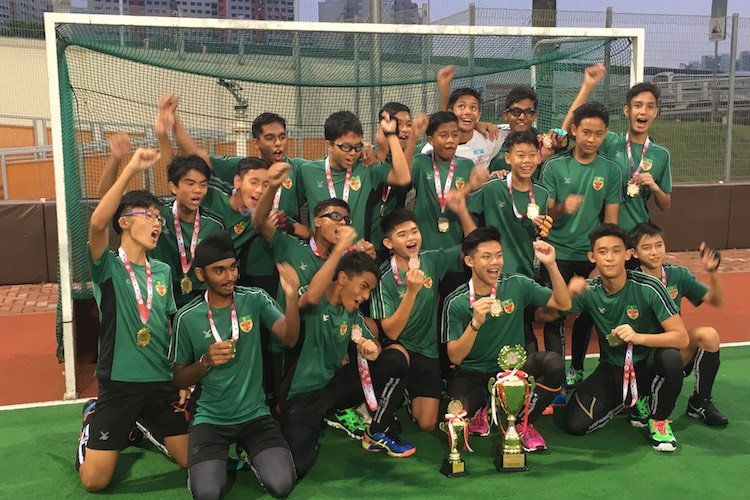 Sengkang Hockey Pitch 1, Thursday, March 30, 2017 — As Raffles Institution’s (RI) Alton Chua (RI #10) stepped up for his second penalty, his earlier miss in the shoot-out against Seng Kang Secondary School in the National B Division Hockey Championship final must have plagued his mind.

The shoot-out entered sudden death and to add more pressure on Alton, he had the power to secure the title for RI by tucking away his penalty. Despite being placed in such a high-stakes situation, the 16-year-old centre-back said, “I was a bit nervous but once the whistle blew (for me to take the penalty), I entered a state of calm.

“The team and I practiced our penalties during training. I just focused on what was important now, never mind the miss earlier, and just applied what I learnt in training.”

And that paid off for Alton who successfully converted his penalty on the second time of asking, taking his time to come close to Seng Kang custodian Riteesh Revanna (SK #16) before misdirecting him to score and give RI the 4-3 shoot-out victory.

Scenes of jubilation were on full display as Alton immediately ran over to his teammates and was mobbed by them, accompanied by the roaring of a raucous Raffles crowd celebrating in the stands. Alton said: “It’s a great honour to be able to bring back the title to Raffles. We remembered losing in the semi-final last year and were spurred on by that.

“We played our best today and knew we were coming against a very strong Seng Kang side. They’re a disciplined team and have a strong base that didn’t make it easy for us to get past them.”

Indeed, the final was a tight affair. Coming into the game, RI only conceded one goal throughout the tournament while Seng Kang kept clean sheets all the way. To match their stingy defences, both teams also possessed deadly attacking statistics as well. They share a combined total of 63 goals (32 by RI and 31 by Sengkang) in seven matches.

The opposing sides offered plenty of action but the contest remained goalless come full time. Even extra time could not separate the two contenders as it stayed 0-0 and the match was decided via penalties but Seng Kang will rue not taking their chances in front of goal when the opportunities arose.

Right from the get-go, last year’s losing finalists attacked RI. Thulasiram Ramanan (SK #7) proved to be a menace for the RI backline throughout the tie. The Seng Kang player came closest to scoring in the second half as he found himself in a one-on-one situation with opposing custodian Amir Khaliq (RI #40) but scuffed his shot.

Seng Kang also had another attacking outlet in Janaardan Joshua (SK #10­). Janaardan was a key cog in the red team, spraying dangerous balls down the flanks and, when given a chance, took a shot himself. Janaardan could have killed the game off in the dying embers of extra-time when he was through on goal but once again, Amir (RI #40) rushed out in time to deny Seng Kang.

RI were no slouches offensively either but their chances came few and far between. Five minutes into the first half of regulation time, RI launched a quick-fire counter-attack and Ethan Tan (RI #7) unleashed a rasping shot that skimmed across the face of goal. That set the pace for the rest of the game. RI sat back to defend the Seng Kang onslaught and soak up the pressure, biding their time to push forward.

One such moment came 10 minutes from regular full time. Muhammad Haikel (RI #17) latched onto a speculative long ball from Balraj Singh (RI #13) down the left and made use of his speed to get into a shooting position. Unfortunately for him, Haikel (RI #17) was caught in between Seng Kang defenders and was dispossessed.

With extra-time approaching, fatigue began to set in for both teams and RI was desperately hanging on as Seng Kang threw everything they had forward. The final whistle blew at 0-0 and the dreaded penalty shoot-out was looming.

RI and Seng Kang scored their first attempts through Ifran Ahmad-Ul Qayyum (RI #19) and Janaardan (SK #10) but drama ensued when Ethan (RI #7) missed his shot. Seng Kang duly obliged to make it 2-1 in their favour through Muhammad Adrian (SK #23). It seemed as if RI were losing grip on their first B Division crown since 2015 when Alton (RI #10) hit off-target but the boys in green were handed a lifeline.

Seng Kang’s third shot-taker Thulasiram (SK #7) rounded the RI goalie and had an empty net to tap into but his shot rattled off the post, much to his chagrin.  Muhammad Raziq (RI #9) took advantage and converted successfully to make it 2-2 while Seng Kang missed again through Supaya Saran Raj (SK #1).

Once again, both schools slotted home their fifth and final penalties (Syaquille Izzad (RI #27) and Muhammad Irfan (SK #3). Sudden death was to decide the B Division winner and Seng Kang went up first this time. However, it was deja vu for Thulasiram (SK #7) as he was unable to find the back of the net.

The next two attempts from both sides resulted in no goals as well until Alton’s (RI#10) conversion handed RI the 4-3 shoot-out victory and the championship.

RI coach Ahmad Bakri, in an ecstatic mood celebrating with his toddler children, said: “First off, I want to congratulate Seng Kang because they played such a good game. I also want to give double congratulations to my boys. They played all out, played from the heart and gave their 100 perecent.

“Seng Kang were slightly more dominant in the game because my players tend to lose focus in the first 10 minutes of a half and you saw Seng Kang controlled the game. I told the players to cool down and focus. To me, the game was 50-50 throughout and either side could have won.

“The boys fully deserved the title. We were prepared for everything today, even the penalties because we practiced on them a lot. This season was a fantastic one and I’m happy we went all the way this time.”

Seng Kang coach Mohamad Ali said, “The result is one thing but I’m very proud of the boys and they played very well. They never gave up. They knew they had to press on and get the goal. We had our chances but we never took them. Come the penalty shoot-out, it’s down to mental strength and some luck.

“For the boys to lose two finals in a row, it is hugely demoralising for them. Despite that, I want them to keep their heads up because they did everyone proud by coming this close and the team really put in a lot of effort.”