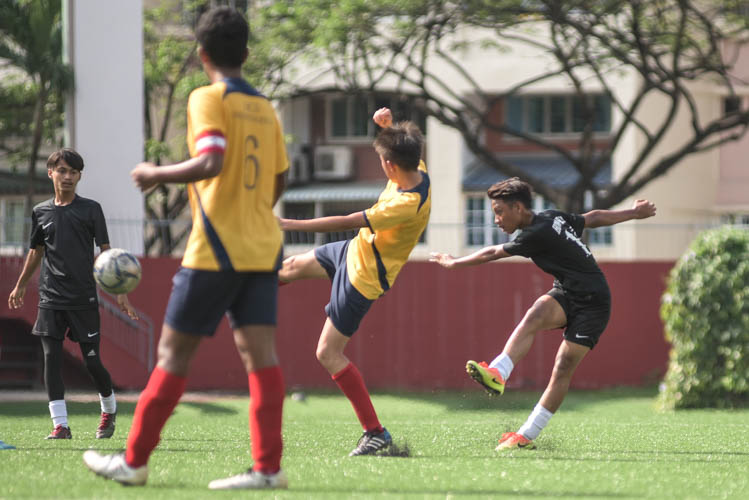 Jurong East Stadium, Monday, March 27, 2017 — Hong Kah (HK) Secondary sealed their place in Round 2 of their National B Division School Premier League 2 Football campaign at the expense of Anglo-Chinese School (Independent) (ACS(I)) after a 3-1 victory in which each half was played on separate days.

Two long range screamers by Muhammad Raihan (HK #16) and Muhamad Anaqi (HK #11) late in the game was enough to give the 2016 National B Division finalists the win despite getting an early scare after ACS(I) almost mounted a comeback through a goal by Keith Goh (ACSI #10).

Despite the scoreline, Hong Kah’s coach, Mohamed Zainudeen, played down the victory saying that they were “lucky” to win 3-1.

“We are lucky actually, I would say, to have won this game even though we won 3-1,” said the 47-year-old coach who also coaches the national cerebral palsy football team.

“If you look at the goals they are actually individual brilliance rather than anything to do with the team,” he added.

“Credit to the boys who took those chances, that was what we were telling them to take chances up there, take shots because the goalkeeper was always out of position even in the first (half of the) game.”

The match, which was played over two days due to inclement weather, started with Hong Kah leading 1-0 from the first half through Muhammad Aizat. Starting the second half with a goal in the bag, Hong Kah dominated possession from the start and looked comfortable on the ball, prying and probing especially from the left through Nur Hady Matynn (HK #17).

Despite their dominance, however, there was little impetus from the boys in black to find the killer goal and against the run of play, the first real chance of the second half went to ACS(I).

After his miss, Adam made it up three minutes later, providing the assist for Keith’s equaliser when he sent a lob over the defence from midfield. Through on goal and with the goalkeeper advancing, Keith displayed good composure with a well-taken chip to level the scores.

The goal knocked the sails out of the Hong Kah side as their passes in midfield began to stray but the ACS(I) equaliser also gave a sense of urgency to the play. Hong Kah began playing more direct football and threw bodies forward in search of goals.

The strategy began to work as Hong Kah looked more dangerous and went close in the 66th minute through Muhammad Raihan (HK #16) who shot agonisingly wide from around the six-yard box after shaking off his marker.

After failing from close range, Hong Kah eventually got the lead from long range. Picking the ball up from around the middle of ACS(I)’s half, Muhammad Raihan sidestepped his marker and unleashed a piledriver to beat the hapless Shiki Vahaan (ACSI #1).

Two minutes later, Muhamad Anaqi (HK #11) caught Shiki (ACSI #1) out of position and sealed the three points with another powerful drive into the roof of the goal from similar range.

The result meant that ACS(I) is out of contention for the next round but their coach, Lee James, was positive about the result, especially considering this is the first time the school made it into the national stages.

“I am very very proud of (the team)… to take a team like Hong Kah down to the wire I think it was a really even game and it could have gone either way,” said the 33-year-old.

“The score doesn’t necessarily reflect the whole game,” he added.

“If we had won today, we would have gone through, it was a big game and it’s unfortunate that we’ve come out on the wrong side of it.”