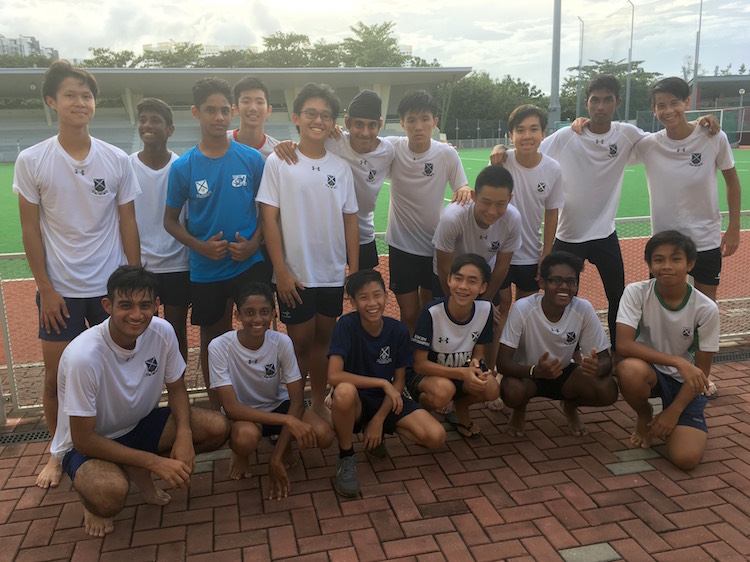 Sengkang Hockey Pitch, Friday, March 3, 2017 — A mark of champions is their strong resilience and St Andrew’s Secondary School proved they had it when they came from a goal down to beat St Joseph’s Institution (SJI) 3-1 in their National B Division Hockey Championship Round 2 group game.

Throughout the match, SJI employed long-ball tactics. Aware of St Andrew’s fluid movement on the field, the boys in green and white launched lob passes over the opposition defensive lines in hopes of exploiting any gaps and creating chances on goal.

However, the Saints quickly regrouped and fought hard at every opportunity to gain possession. They were in control throughout, increasing the tempo with their short passes and quick lay-off as they went up the field. Goalscorer Naveen Kumar, 16, tormented the opposition the whole afternoon with his mazy runs and skilful dribbling.

SJI drew first blood through Yang Yuan Feng (#10) but the defending champions quickly drew level through a deft top-corner finish from Gurditt Singh (#3) to bring the Group X tie to 1-1 going into the break.

Both sides were still evenly matched in the second half but that changed when Naveen Kumar’s (SAS #7) piledriver took a wicked deflection to wrong-foot the SJI custodian and give the Saints a 2-1 lead 10 minutes from time. This left the dejected SJI boys vulnerable and Isaac Cheong (SAS #11) took full advantage to score the final goal to seal the victory for his side.

“We thought we were going to lose when SJI scored but we knew we had to win this game if we wanted to qualify for the semi-final,” said centre midfielder Naveen. “I kept telling my teammates to focus and follow the game plan. We were the hungrier side and that was a big difference.”

St Andrew’s coach Paramjit Singh lauded his side’s display but insisted improvements are still necessary, saying, “We dominated the game. We moved the ball around well and the chances were there. It’s just that our end product was lacking and we weren’t clinical enough with the finishing.

“That’s an area we need to improve on but otherwise, our defence and midfield did very well. The whole team know we can beat them. We just need to tighten up at the back. We’re extremely glad we came out with the victory because this game could decide who goes to the semi-finals.”

Despite the defeat, an upbeat SJI teacher-in-charge K Arul said, “We had a good start and the boys were really brimming with a lot of enthusiasm. But when their equaliser came, we knew it was going to be a tough game.

“Both teams were even in terms of strength, attitude and skill but somehow, you can tell that the other side were much more motivated to score the goals. We just have to pick ourselves up and move on because we gave a very good fight today.”

St Andrew’s next take on bottom-side Woodlands Ring Secondary School while SJI will have their work cut out for them as they square off against table-toppers Raffles Institution.