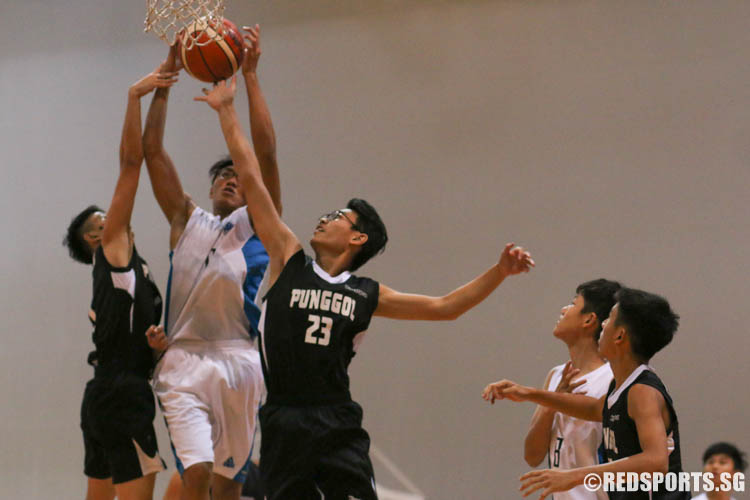 This is Edgefield’s sole win in Group Z and they finish in fifth place. Punggol, having previously lost to North Vista, Ahmad Ibrahim, Catholic High and Christ Church, finished sixth.

Punggol capitalised on multiple openings and turnovers and they led 10-8at the end of the first quarter.

The second quarter saw to Edgefield gain momentum with better shooting as they scored from both three- and two-point range.

George Soo (ES #2) had his first three-pointer while teammate Ong Jun Min (ES #10) teased his opponents with his quick dribbling and relentless driving in.

The two teams were evenly matched in the third period. With both teams playing more aggressively, there were quick turnovers and both found it hard to score while poor shooting saw multiple rebounds.

Both teams produced only five points each in the third quarter, leaving Edgefield with a 10-point, 33-23 lead heading into the fourth quarter.

The fourth quarter saw Bryan Kan (ES #0) keeping Punggol at bay with his shooting skills, as he finished with a game-high 20 points to help Edgefield win 45-32.

Bryan Kan (ES #0) said, “Cooperation between team members was stronger this time round and we played to the best of our ability. Despite today’s performance, there is still much room for improvement and more could be done to better our speed, shots and team defense.”